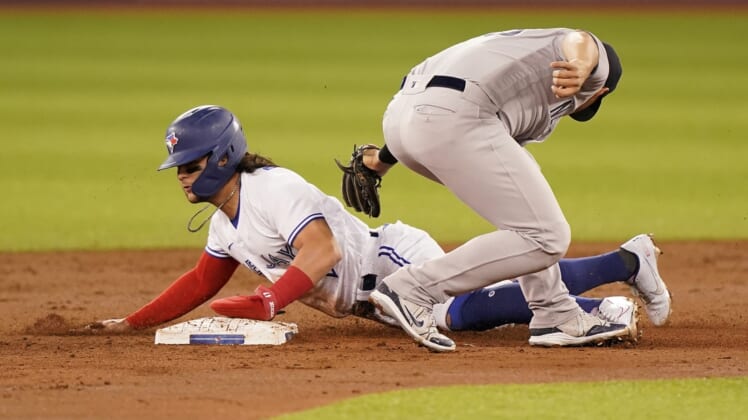 By taking the opener of a three-game series, the Yankees (90-67) posted their seventh victory in a row and opened a two-game lead on the Red Sox (88-69) for the top wild card. Boston is one game up on Toronto (87-70) and also a game up on Seattle (87-70) pending the Mariners’ late result at Oakland.

Stanton has homered in four straight contests, amassing 13 RBIs in those games.

Blue Jays left-hander Hyun Jin Ryu (13-10) allowed three runs and six hits in 4 1/3 innings. He had missed his previous start due to a tight neck.

After the Yankees could not score despite having runners at second and third with one out in the first inning, the Blue Jays took a 1-0 lead in the bottom of the frame.

George Springer led off with a walk, stole second and scored on Bo Bichette’s two-out single.

Judge tied the game in the third with his 37th homer of the season, a drive to right with two outs and a full count.

Yankees starter Jameson Taillon left the game after 2 1/3 innings when he aggravated a right ankle tendon injury while striking out Danny Jansen. Taillon had been activated from the injured list for the start. Michael King (1-4) replaced him and allowed one run in 2 2/3 innings.

Toronto regained the lead in the fourth. Bichette singled, advanced to third on two groundouts and scored on Corey Dickerson’s two-out double to right.

The Yankees took a 3-2 lead in the fifth. Urshela singled with one out, DJ LeMahieu walked and Anthony Rizzo served an RBI single to left. Adam Cimber replaced Ryu and allowed Judge’s sacrifice fly.

Yankees reliever Clay Holmes survived two walks in the bottom of the sixth. Bichette was thrown out at third for the second out while trying to advance on a ball in the dirt.

Stanton’s 35th homer of the season came against Trevor Richards in the seventh to give the Yankees a 6-2 lead. The two-out blast scored LeMahieu, who had singled, and Judge, who had walked.

Urshela hit his 14th homer of the season in the ninth against Anthony Castro.