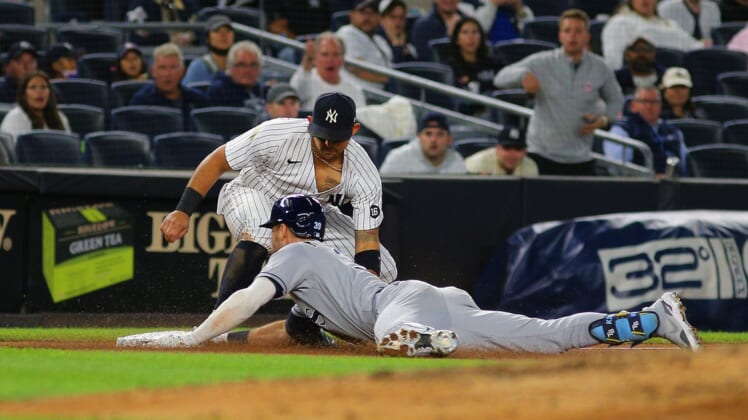 Rookie Wander Franco hit a two-run single in the ninth inning and Kevin Kiermaier hit a tiebreaking single in the second Friday night as the visiting Tampa Bay Rays recorded a 4-3 victory over the New York Yankees, who were unable to clinch a postseason spot.

The Yankees (91-69) entered the game with a magic number of two to clinch their fifth straight postseason spot. New York needed a win or a loss by both the Boston Red Sox and Seattle Mariners. The Red Sox beat the Washington Nationals 4-2 while Seattle was hosting the Los Angeles Angels later Friday.

New York also needed to win and get a Red Sox loss to secure the first wild-card spot for the fourth time since it was added to the postseason format in 2012.

Kiermaier snapped a tie with a well-placed fly ball to short left field. His hit went slightly over Gio Urshela’s head and the shortstop was unable to make a running catch, allowing Manuel Margot to give Tampa Bay a 2-1 lead.

Kiermaier’s hit helped the Rays (99-61) move closer to their first 100-win season in team history. Tampa Bay also improved to 10-7 in the season series, including 6-2 in New York, where it is 11-3 since the start of last season.

Nelson Cruz homered three batters in off Yankees left-hander Nestor Cortes Jr. Cruz’s homer was the 449th of his career, tying the slugger with Hall of Famers Vladimir Guerrero Sr. and Jeff Bagwell for 40th on the all-time list.

Giancarlo Stanton hit an RBI single in the first for the Yankees, who lost for only the second time in their past 10 games.

Rookie Shane McClanahan went the first three innings and allowed one run on three hits. Pete Fairbanks tossed the fourth and Louis Head (2-0) worked 2 1/3 frames to get credited with the win by the official scorer.

Josh Fleming tossed two perfect frames and Andrew Kittredge allowed RBI singles to Joey Gallo and Brett Gardner before getting his eighth save.

Cortes (2-3) allowed two runs on five hits in 4 2/3 innings with five strikeouts and no walks.