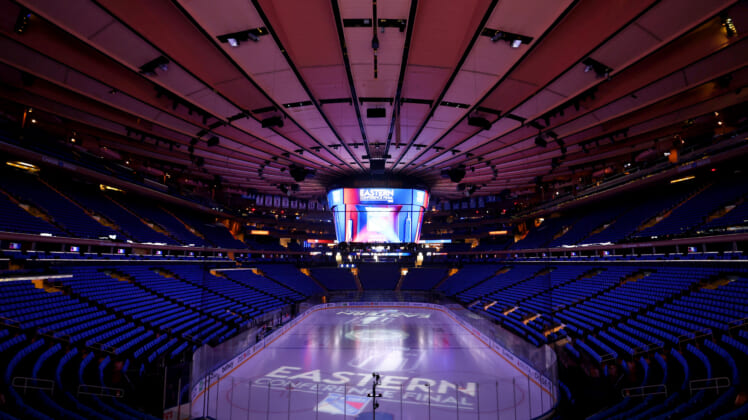 On Thursday night, the New York Rangers suffered a frustrating loss to the Tampa Bay Lightning in Game 5 of their Eastern Conference NHL Playoffs series. And one fan of the Rangers handled the defeat in an absolutely abhorrent manner afterward.

Heading into the weekend, the Rangers were riding high after they were up 2-0 in their best-of-seven series against the reigning Stanley Cup champion Lightning. However, things have since changed quickly in the series between the two Eastern Conference powerhouses.

On Sunday, Tampa Bay battled back from a two-goal deficit to get their first win in the series by a score of 3-2. Two days later, the team that has won back-to-back NHL titles was able to hold serve at home and even the series at two when they pummeled the blue shirts 4-1 in Game 4.

On Thursday, the squads returned to New York for a pivotal fifth matchup. Once again, the Tampa Bay Lightning came on strong late and scored two goals in the third period to win 3-1 and are now one win away from returning to the Finals for the third straight year.

Obviously, the loss was a tough pill to swallow for New York Rangers fans. However, on Thursday night one of the team’s supporters handled the setback in a most heinous way.

In the above video, you can see fans from both teams heading down one of Madison Square Gardens‘ major walkways towards the main entrance of the building. Among the hockey enthusiasts, a Rangers and Lightning fan can be seen exchanging some post-game thoughts. 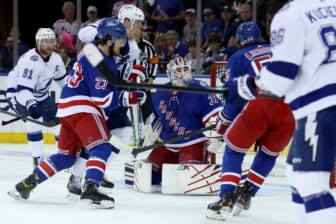 However, things quickly changed from conversation to an outright attack as the Rangers fan turned and blasted the rival supporter with a cheap shot that knocked the man completely out cold. The attacker walks off and the video ends with onlookers tending to the individual and witnesses informing MSG security staff of who the perpetrator was.

It is unclear what the condition of the victim is after the cheap shot but he can be seen lying on his side, instead of flat on his back towards the close of the footage. Hopefully a sign he was able to walk off from what likely might be a concussion.