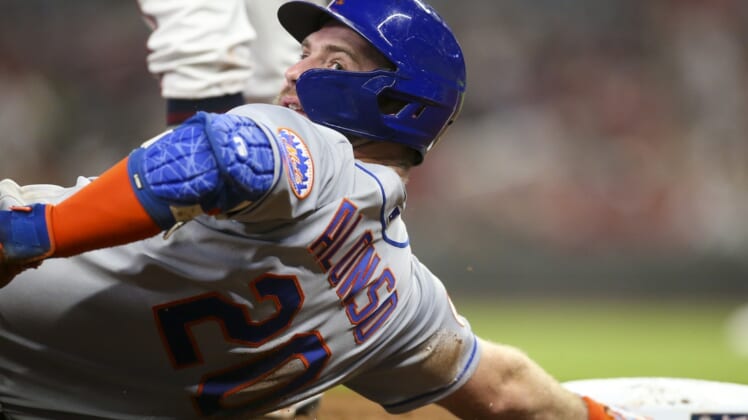 Nimmo’s longballs gave him eight this year and paced the team’s 11-hit attack, with three of them by Pete Alonso.

Megill’s only hit allowed came against Ozzie Albies with one out in the fourth. The right-hander allowed one walk and struck out six.

Edwin Diaz, the Mets’ fourth reliever used, worked a scoreless ninth and earned his 32nd save.

New York (77-83) has won four of its last five. Atlanta (86-73) saw its six-game winning streak snapped in its first game since clinching the National League East on Thursday.

The Mets scored two runs in the fourth inning. Francisco Lindor walked and scored on Alonso’s double to left. Alonso was called out while trying to reach third, but the outcome was reversed on appeal. Alonso then scored on James McCann’s bloop single to left.

New York added a run in the fifth on Nimmo’s first homer of the night.

The Braves scored a run in the sixth off when Albies doubled in Ehire Adrianza.

Nimmo hit his second homer in the seventh, but the Braves answered with Eddie Rosario’s 14th homer in the bottom of the inning to leave New York with a 4-2 lead.

Adrianza hit his fifth homer in the eighth inning to get Atlanta to within one run.

Atlanta rested several regulars — first baseman Freddie Freeman, shortstop Dansby Swanson, outfielders Adam Duvall and Jorge Soler along with catcher Travis d’Arnaud. Atlanta manager Brian Snitker said before the game he would mix the reserves in throughout the series to give the starters a night off.

Albies stole his 20th base to become the seventh Brave to have 30 homers, 20 steals and 100 RBIs in a season. He joined Hank Aaron, Dale Murphy, Ron Gant, Chipper Jones, Andruw Jones and Ronald Acuna Jr.