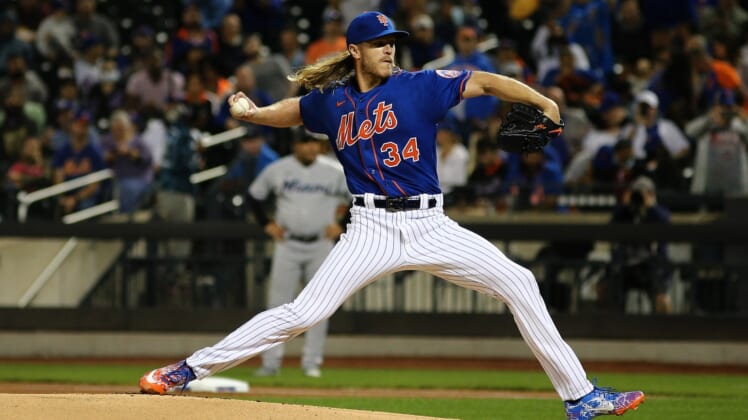 Noah Syndergaard made his first appearance in almost exactly two years Tuesday night for the host New York Mets, who earned a doubleheader sweep by edging the Miami Marlins, 2-1, in nine innings.

Francisco Lindor homered and finished with three RBIs in the Mets’ 5-2 win in the opener.

Tied 1-1 in the ninth inning of the nightcap, automatic runner Javier Baez went to third on a leadoff groundout by Pete Alonso. James McCann followed with a nubber in front of the mound. With the speedy Baez racing for home, Anthony Bass (3-9) tried gloving it and tossing it home, but the ball glanced off his glove as Baez slid home.

The Mets (75-82), who entered Tuesday with 10 losses in their previous 11 games, played their 14th doubleheader — the most for the franchise since the 1979 club played 15 doubleheaders. New York earned at least a split in each twinbill, going 17-11 overall.

Syndergaard struck out two in a perfect first inning in his first big league action since Sept. 29, 2019 — a span of 729 days. Syndergaard underwent Tommy John surgery in March 2020 and had his return delayed this season by a sore right elbow as well as a positive COVID-19 diagnosis.

Trevor Williams followed Syndergaard and allowed one run — on a 455-foot homer by Jesus Sanchez on Williams’ first pitch — on five hits with six strikeouts over four innings.

Marlins starter Trevor Rogers retired the first 11 batters he faced and nursed the 1-0 lead into the fifth, when Jonathan Villar doubled with one out and scored on Kevin Pillar’s single.

Rogers gave up three hits and walked none with six strikeouts over five innings.

Villar had two hits, as did Eddy Alvarez for the Marlins.