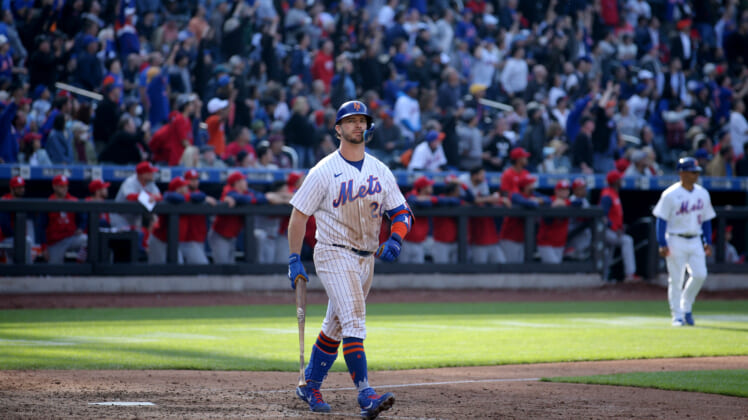 Even with the bad news of an injury to ace pitcher Max Scherzer, the New York Mets continued their torrid start to the 2022 season on Thursday in walk-off fashion.

The Mets have been one of the biggest stories to start the MLB season. While hopes were that they would improve on their 77-85 finish in 2021, they have surpassed the early dreams with their hot start this season. After 40 games, they are in first place in the National League East with a 26-14 record and building a reputation as a team that gets clutch hits and is never out of a game.

They proved that once again on Thursday during a matinee affair against the St. Louis Cardinals in Flushing. The team has yet to lose a series and has split just one four-game set in 2022. Heading into today’s matchup, the Cardinals (20-18) were in search of getting a split in the team’s four-game series. And they were almost there in the 10th inning today.

The New York Mets actually led 5-4 and were looking to close out another win in the ninth with Edwin Diaz on the mound. Diaz has been fantastic this season until today. In the top of the ninth, the Cardinals were able to rally and tie the game at five and send it into extra innings. Then in the 10th, St. Louis showed its fortitude and scratched out another run to take the lead and put the Mets on the ropes.

However, once again New York showed the resiliency that has given them a special vibe in 2022 and quickly bounced back. In the bottom of the tenth, the Mets were able to get a man on when their middle-of-the-order powerhouse Pete Alonso came to the plate. On a 1-0 count from closer Giovanny Gallegos, Alonso dropped the hammer down and sent the pitch screaming into the second deck in left field.

It was a moon shot that is par for the course for the powerful Alonso as he notched his team-leading 10th home run and 35th and 36th run-batted-in. It was just the latest installment in what has been an “Amazin'” start to the season for the New York Mets.