Aaron Loup (2-0) pitched an inning of relief and Jacob Barnes got the final out for his second save.

C.J. Cron had a hit and a run and Raimel Tapia and Connor Joe added RBI singles for Colorado. Rockies shortstop Trevor Story left in the fourth inning with tightness in his right arm.

Colorado threatened in the first with runners on second and third with two outs but starter Joey Lucchesi got Brendan Rodgers to fly out to end the inning.

New York scored on its chance in the bottom of the first against Antonio Senzatela (1-5). Jonathan Villar walked, went to third on Francisco Lindor’s single and scored on McKinney’s double-play grounder to make it 1-0.

The Rockies tied it in the fourth with their first run in 18 innings. With one out Cron singled and moved to second on a wild pitch and Yonathan Daza drew a two-out walk.

Drew Smith relieved Lucchesi and Joe tied it with an RBI single to right. It was the Rockies’ first run since the second inning of Tuesday’s 3-1 loss to the Mets. 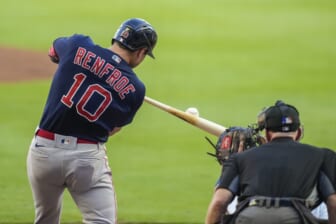 Lucchesi allowed one run on two hits in 3 2/3 innings.

New York went right back in front in the bottom of the fourth. McKinney reached on a one-out double, Senzatela hit Dominic Smith and James McCann walked to load the bases.

Senzatela struck out Patrick Mazeika for the second out but Peraza’s single to left drove in McKinney with the go-ahead run.

New York loaded the bases again in the sixth on a walk, double and a hit by pitch and then Jordan Sheffield walked two batters to bring in two more runs.

Colorado got a run in the seventh when Charlie Blackmon was hit by a pitch, went to second on defensive indifference and scored on Tapia’s single.