Sophomore Julian Strawther, making his first collegiate start, scored a game-high 17 points and grabbed 10 rebounds as top-ranked Gonzaga opened its season with a 97-63 victory against Dixie State on Tuesday night in Spokane, Wash.

Rasir Bolton, transfer from Iowa State, added 15 points and Drew Timme scored 11 for the Bulldogs, who went 31-1 last season with the lone defeat coming against Baylor in the NCAA Tournament’s championship game.

Assistant Brian Michaelson acted as the head coach for the Zags as Mark Few completed a suspension for an offseason DUI citation.

Dixie State went 8-13 last season, its first in Division I. That included a 112-67 loss at Gonzaga in a game played without any fans because of the COVID-19 pandemic.

This time the Trailblazers, from St. George, Utah, were treated to a capacity crowd at the Kennel.

It seemed to affect them early, as the Zags scored the game’s first six points and led 17-3 midway through the first half.

Holmgren had 11 points and nine rebounds in the half as Gonzaga took a 40-25 lead into the intermission. 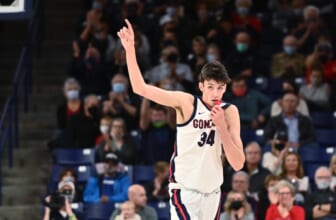 The Trailblazers pulled within 49-39 on a second-chance layup by Gooden with 14:06 remaining, before Gonzaga put together an 11-0 run in less than two minutes to regain control. Strawther scored seven points during the run, with a jumper, a three-point play and a thunderous dunk to make it 60-39.

Gonzaga shot 54.4 percent from the field (37 of 68) despite going just 6 of 21 from 3-point range. Thanks to Holmgren and Timme, the Zags had a 45-36 edge in rebounding and a 54-28 advantage in points in the paint. The Bulldogs also outscored the visitors 22-6 in fastbreak points.