Brandon Ingram returned from a seven-game absence due to a hip contusion to add 19 points, Herbert Jones scored 17 off the bench, Jonas Valanciunas had 15 points and 10 rebounds and Devonte’ Graham scored 15 as the Pelicans won for the first time at home and just the second time overall this season.

Dillon Brooks scored 23 points, Ja Morant had 22 points and 10 assists, former Pelican Steven Adams recorded 15 points and nine rebounds, Desmond Bane added 14 points and Kyle Anderson had 13 off the bench to lead the Grizzlies, who were coming off a 119-94 home loss to Phoenix in which they trailed by as many as 38 points one night earlier.

The Pelicans led by 21 points three times in the third quarter, the last time coming on a jumper by Graham.

But Anderson scored five points as the Grizzlies closed on a 14-4 run to cut the lead to 83-72 at the end of the period.

Alexander-Walker scored seven quick points as New Orleans increased its lead to 92-76 less than three minutes into the fourth quarter.

The Grizzlies cut the lead to 13, but Jones answered with back-to-back 3-pointers for a 100-81 lead. 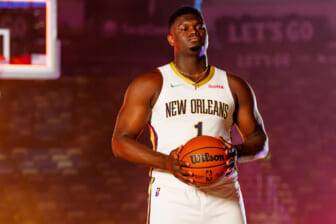 Memphis got within nine, but New Orleans scored the next six. Graham and Valanciunas made consecutive baskets and Jones made two free throws to give New Orleans a 112-97 lead with 2:01 remaining.

Alexander-Walker scored nine points and Graham had five before Ingram made his first field-goal attempt, giving the Pelicans a 17-8 lead.

New Orleans built the lead to 18 points before Williams hit a jumper and Brooks added a 3-pointer to pull Memphis within 35-22 at the end of the first quarter.

Valanciunas, Josh Hart and Trey Murphy III each made a 3-pointer as the Pelicans took a game-best 50-28 lead.

The Grizzlies pulled within 16 three different times before Murphy made another 3-pointer and New Orleans took a 62-44 halftime lead.