Tanner Jeannot scored the tiebreaking goal at 5:06 of the third period as the Nashville Predators rallied to defeat the visiting Los Angeles Kings 2-1 Tuesday night.

Matt Duchene also scored and goaltender Juuse Saros made 25 saves for the Predators, who earned their first victory in three games this season.

Los Angeles’ Anze Kopitar scored his fifth goal of the campaign, tied with Detroit’s Tyler Bertuzzi for the NHL lead. Goalie Calvin Petersen, who was celebrating his 27th birthday, stopped 29 of 31 of shots.

In the first two periods, Petersen made 23 saves, including a penalty shot by Filip Forsberg, to keep the Predators off the scoresheet.

Nashville tied it on the power play just 1:07 into the third.

Defenseman Roman Josi intercepted a Los Angeles clearing attempt at the blue line and took a slap shot from the top of the right faceoff circle. The puck was knocked down by a scrum of players in front of the net, and following a scramble, squirted free to Duchene on the right wing. He fired the rebound over a sprawling Petersen.

Mikael Granlund was also credited with an assist.

Jeannot got the winner less than four minutes later. Alexandre Carrier’s shot from the point was blocked, but Colton Sissons got the puck low on the right wing and sent a pass across the top of the crease to Jeannot, who tipped it into the open side of the net.

Kopitar opened the scoring at 4:38 of the second period. Defenseman Drew Doughty gained control of the puck deep in his own zone and made a pass to Dustin Brown on the right wing. Brown sent the puck cross-ice to Kopitar in the neutral zone, and the center skated over the blue line and took a quick wrist shot from the top of the left faceoff circle that beat Saros and made its way just inside the far post.

The Predators got a penalty shot late in the second period after Forsberg deked one defender at the blue line and was hooked from behind by Doughty while approaching the net. However, Petersen turned aside the penalty shot to preserve the 1-0 lead. 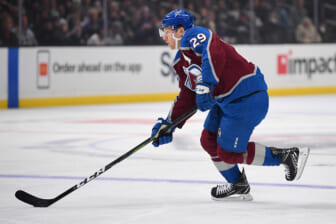