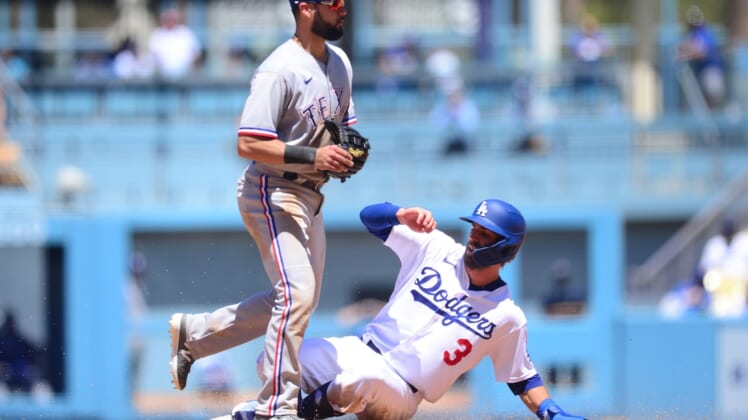 Walker Buehler pitched six scoreless innings and Mookie Betts hit a home run as the Los Angeles Dodgers held on to earn a 5-3 victory on Sunday over the visiting Texas Rangers.

Zach McKinstry went 3-for-3 and hit a two-run double in a three-run third inning as the Dodgers won for the fifth time in their last six games. Los Angeles is 2-1 to start a six-game homestand.

Rangers starter Dane Dunning (2-5) gave up four runs on seven hits over four innings. Dunning gave up a first-inning run on a double by the Dodgers’ Gavin Lux and has now given up 16 of his 32 runs allowed this season in the opening inning.

The Rangers rallied with three runs in the ninth and had the bases loaded with nobody out before Dodgers closer Kenley Jansen finished off his 15th save in 17 chances on two popups and a nine-pitch at-bat against Nick Solak that ended in a ground out.

Buehler (6-0) gave up five hits with three walks and five strikeouts, while earning the win for the fifth time in his last six starts.

The Rangers were held in check one day after they ended a 16-game road losing streak by putting together a season-best 12 runs on 17 hits.

Betts’ home run Sunday off Dunning led off the third inning. It was just his seventh of the season but two have come in the last four games.

Lux and Chris Taylor followed Betts’ home run with singles and McKinstry hit his two-run double to the wall in left-center field with two outs for a 4-0 advantage. McKinstry’s three hit-game comes after he collected two in 10 games following his return from the injured list because of a right oblique strain.

The Dodgers increased the lead to 5-0 in the seventh inning after Betts singled, moved to second on a Lux ground out and third on a Taylor fly ball, before scoring on a Matt Beaty single.

The Rangers spoiled the Dodgers’ shutout bit in the ninth inning with Jason Martin and Isiah Kiner-Falefa delivering RBI singles off right-hander Phil Bickford, while Adolis Garcia added an RBI single off Jansen.