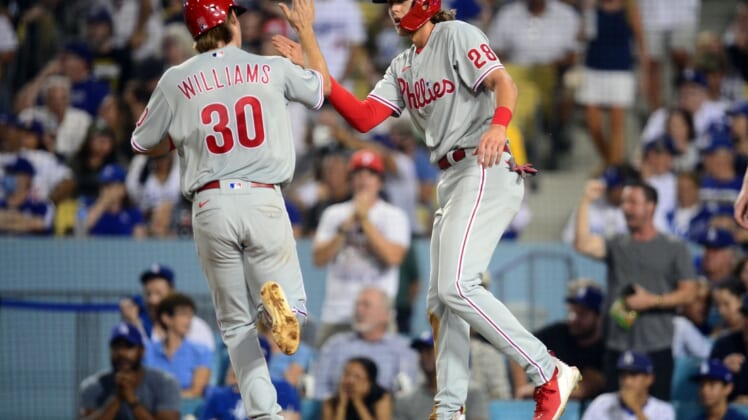 Mookie Betts hit a tiebreaking homer in the seventh inning Tuesday and the Los Angeles Dodgers earned a 5-3 victory over the Philadelphia Phillies on the first night Dodger Stadium played host to a capacity crowd in nearly two years.

Los Angeles won for the seventh time in eight games while Philadelphia dropped its second in a row.

Dodgers starter Julio Urias gave up three runs (two earned) over 5 2/3 innings and drove in a run with a double. However, he wound up with a no-decision and was unable to become the first pitcher in baseball to reach double digits in victories.

Andrew McCutchen homered for the Phillies, who rallied to tie the game in the fifth inning when two runs scored on a single from Odubel Herrera and an error by Dodgers left fielder Matt Beaty.

Phillies right fielder Bryce Harper left the game because of lower back tightness after striking out in the fourth inning.

The Dodgers announced that 52,078 fans were in attendance as the state of California dropped most mask mandates and social-distancing requirements.

Wearing jerseys with gold trim, the Dodgers had pregame ceremonies similar to Opening Day. Then they went out and took a 1-0 lead in the first inning on a fielder’s-choice grounder from Will Smith.

McCutchen’s home run, his 11th, tied the score 1-1 in the second inning. Immediately after Harper departed in the fourth inning, the Dodgers took a 3-1 lead on consecutive RBI doubles from Zach McKinstry and Urias.

A pair of Dodgers defensive miscues helped the Phillies in the fifth. Alec Bohm singled, and Chris Taylor made a throwing error on Luke Williams’ grounder. After a Zach Eflin sacrifice bunt, Herrera singled to left, with both runners able to score after Beaty’s error.

Playing in front his first capacity home crowd in his second season with the Dodgers, Betts hit his go-ahead home run to center off Phillies left-hander Ranger Suarez (2-1). It was his eighth long ball of the season.

Betts added an RBI single in the eighth inning for a two-run lead.

Joe Kelly (2-0) pitched a scoreless inning to pick up the victory, and Blake Treinen tossed a hitless ninth for his third save.