After being no-hit for the first seven innings Tuesday, the Mississippi State Bulldogs exploded for six runs in the eighth to defeat the Virginia Cavaliers 6-5 in the College World Series at Omaha, Neb.

Virginia led 4-0 heading into the eighth.

Griff McGarry threw seven no-hit innings for the Cavaliers before walking Scotty Dubrule walked to start the inning. After getting a fly out, McGarry gave up a two-run homer to Kellum Clark, ending his night.

A single from Josh Hatcher and a double to Rowdey Jordan forced another pitching change from Virginia, who handed the ball to closer Stephen Schoch to face SEC Player of the Year Tanner Allen.

Allen won the battle, smoking the second pitch of the at-bat into the stands for a go-ahead three-run home run.

The Bulldogs added a sixth run when Dubrule singled home Tanner Leggett later in the inning.

The Cavaliers got a run back in the bottom of the inning on a Chris Newell home run, but went down in order in the ninth. 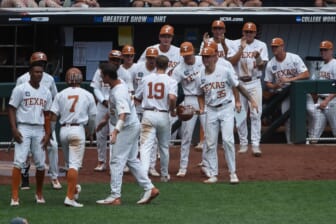 Virginia scored all of its runs against Mississippi State starter Christian MacLeod, who left after 1 1/3 innings after giving up four runs and five hits.