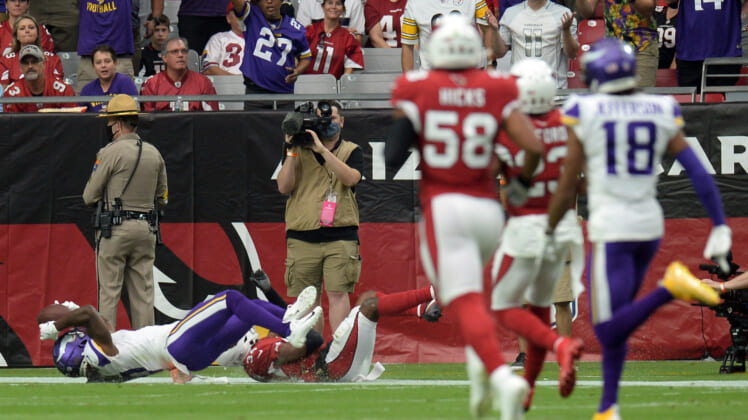 The Minnesota Vikings (0-1) are taking on the Arizona Cardinals (1-0) at State Farm Stadium in Glendale, Arizona today.

After a quick three-and-out from Kyler Murray and the Cardinals’ offense, the Vikings didn’t take long to get on the scoreboard. From their second play from scrimmage, Kirk Cousins found second-year pro K.J. Osborn along the right sideline for a 64-yard touchdown.

It appears as Byron Murphy got lost or confused in coverage, as Cousins found Osborn wide-open in space. Whatever happened, it wasn’t defense.

It was Osborn’s first touchdown of his Minnesota Vikings career. A 2020 fifth-round pick out of the University of Miami, Osborn appears to have a firm grasp as the third-receiver behind stars Adam Thielen and Justin Jefferson. The Vikings hope to keep up with the Cardinals’ explosive offense this week. If they can keep connecting on long touchdowns as they did to Osborn, they can avoid an 0-2 start.