The bottom of the order came up big for the Twins as Minnesota defeated the Kansas City Royals 6-5 Saturday afternoon. Batters five through nine combined to go 6-for-16 with five runs scored and three RBIs.

The Twins evened the series at a game apiece.

J.A. Happ (3-2) earned the win. He allowed two runs on three hits in five innings. Ervin Santana (0-1) took the loss as an “opener.” He gave up three runs in three-plus innings.

Taylor Rogers pitched a shaky ninth for his fourth save in six chances.

The Twins scored a historic run off Santana in the first inning. Josh Donaldson lined a one-out single up the middle, followed by a similar hit by Alex Kirilloff. Nelson Cruz followed with a ground-rule double to right. Donaldson trotted home with the 2 millionth in MLB history.

The Royals’ Jorge Soler left in the bottom of the second with right groin discomfort. The Twins’ Max Kepler aggravated a hamstring strain running out a groundout to end the second.

Salvador Perez hit his 19th career home run at Target Field, extending his own record for most home runs by a visiting player. Perez’s home run, just into the seats in left, drove in Carlos Santana and tied the game.

The Royals helped the Twins retake the lead in the fourth. Santana walked the leadoff batter, ending his day. Reliever Carlos Hernandez walked the next two batters, loading the bases with no outs. A bloop single by Rob Refsnyder scored one, and the second run scored on a passed ball. 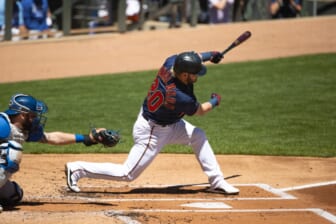 The Twins got another run in the sixth on a double by Mitch Garver and an error on a ball hit by Larnach.

The Royals put runners on first and third with no outs in the eighth but scored only once, on a double play. Minnesota got that run back on another RBI single by Refsnyder.

Adalberto Mondesi’s two-run homer off Rogers scored Kelvin Gutierrez and drew the Royals within one in the ninth.