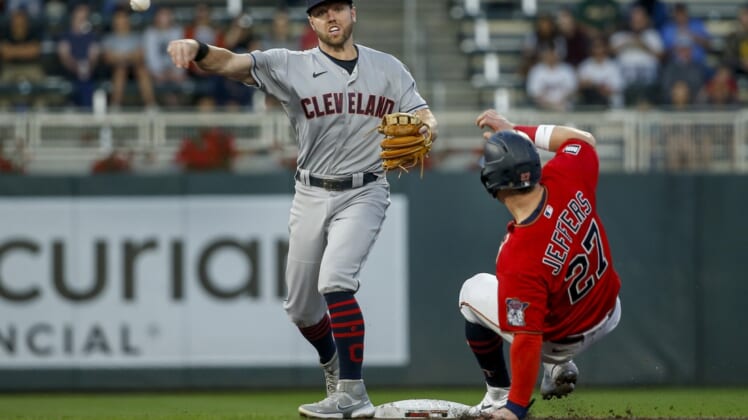 Ryan Jeffers went 3-for-3 with a homer, a double and four RBIs to lead the as the Minnesota Twins earned a split of their doubleheader with the Cleveland Indians, taking the nightcap 6-3 victory on Tuesday in Minneapolis.

The three hits matched a career high for Jeffers, who also scored twice. Nick Gordon added two hits and a stolen base for Minnesota (64-82), which snapped a three-game losing streak.

Kyle Barraclough (1-0) picked up his first win for the Twins with an inning of scoreless, hitless relief. Alex Colome handled the final inning his 14th save.

Jose Ramirez and Amed Rosario each had an RBI double for Cleveland (70-73), which had snapped a three-game losing streak with a 3-1 victory in the first game. Logan Allen (1-7) took the loss in the second game after giving up four runs on seven hits in 3 2/3 innings. He struck out three and walked one.

Cleveland took a 3-0 lead in the third inning against Minnesota starter Charlie Barnes, who gave up only a walk over the first 2 1/3 innings.

Oscar Mercado started the rally with a single and took second on a groundout by Myles Straw. Rosario then ended an 0-for-18 skid with a double off the wall in right-center to drive in Mercado. Ramirez followed a double down the left field line to drive in Rosario to make it 2-0, and he came around to score on a single to left by Franmil Reyes.

Minnesota answered with four runs in the fourth off Allen, racking up five hits.

Jorge Polanco led off with a single and went to third on a one-out single by Miguel Sano. Jeffers hit a two-out, two-run double into the left field corner and then scored on a double by Willians Astudillo over the head of Reyes in right field. Nick Gordon lined a single to center to drive in Astudillo and make it 4-3.

The Twins extended their lead to 6-3 in the sixth on Jeffers’ 13th home run of the season. The 426-foot drive into the flower bed in right-center drove in Ryan Refsnyder, who had doubled.