Just recalled from the minors, Randy Dobnak threw six scoreless innings in his first 2021 start and the visiting Minnesota Twins scored nine times in the fourth inning of a 10-0 rout of the Cleveland Indians.

Rookie Alex Kirilloff had two hits with two RBIs for the Twins, who gave Dobnak more offense than needed while winning back-to-back games for the first time since May 2-3.

A starter for most of his first two seasons with Minnesota, Dobnak (1-3) struggled while all seven of his previous 2021 appearances came out of the bullpen. He was sent down to Triple-A St. Paul on May 2, and called up to start Friday, where he yielded just three singles with five strikeouts and two walks.

The Twins opened the scoring when Rob Refsnyder deposited the ball well into the left-field seats in the third inning off Indians starter Triston McKenzie (1-3) for a 1-0 lead.

In the break-out fourth, Minnesota chased McKenzie, who allowed four of his five walks and five of his six runs in the frame while lasting 3 1/3 innings overall.

A two-run double from Max Kepler and a single from Kirilloff that scored two highlighted the nine-run barrage for Minnesota. The Twins sent 13 batters to the plate and took advantage of five combined walks by McKenzie and reliever Phil Maton, who allowed the other four runs and only retired one of the six batters he faced before leaving in the same inning.

Eddie Rosario recorded two of the five hits for Cleveland, which was looking for a third consecutive victory. One bright spot for the Indians was reliever Jean Carlos Mejia, who gave up a hit and struck out five without a walk over 2 1/3 innings of his major-league debut. 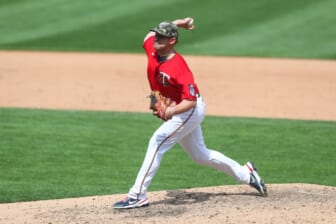 Minnesota slugger Nelson Cruz was scratched from Friday’s starting lineup due to a sore wrist suffered after he was hit by a pitch against the Los Angeles Angels on Thursday.