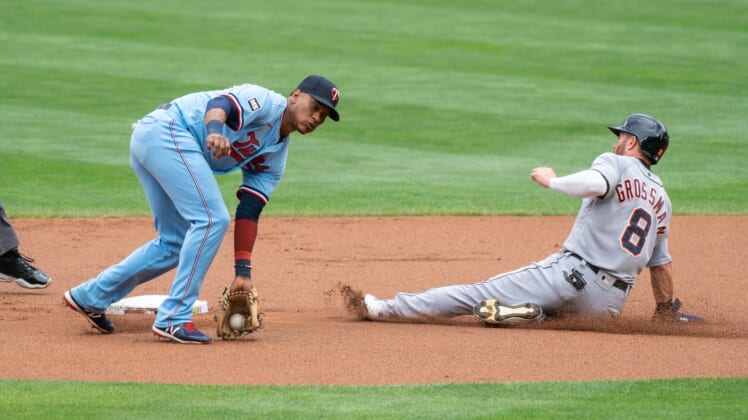 Jorge Polanco hit a three-run, go-ahead home run and Alex Kirilloff also homered as the Minnesota Twins rallied from a 4-0 sixth-inning deficit to win their third straight game, 9-4, over the Detroit Tigers on Saturday afternoon in Minneapolis.

Luis Arraez went 3-for-5 with a two-run double and Nelson Cruz went 3-for-3 with a walk and a run scored for Minnesota, which won for the 12th time in the last 15 meetings with the Tigers. Danny Coulombe (1-0) picked up the win with 1 1/3 innings of scoreless relief.

Zack Short went 2-for-3 with a home run and two RBIs and Niko Goodrum also homered for Detroit. Joe Jimenez (2-1), the fourth of seven Tiger pitchers used on a bullpen day, took the loss by allowing three runs on three hits in two-thirds of an inning.

Detroit jumped out to a 2-0 lead in the second inning against Twins starter Bailey Ober with back-to-back, two-out solo homers by Goodrum and Short. Goodrum’s 390-foot drive into the right-field bleachers was his sixth of the season while Short’s 369-foot drive to left just cleared the glove of Trevor Larnach and was his third of the season.

The Tigers increased their lead to 4-0 in the fourth when Eric Haase and Jeimer Candelario led off with back-to-back walks and came around to score on a RBI single by Harold Castro and a sacrifice fly by Short, respectively.

Minnesota cut it to 4-2 in the sixth on Kirilloff’s eighth home run of the season, a 429-foot drive to right-center field off Erasmo Ramirez. He drove in Cruz, who had singled.

The Twins then took the lead the seventh with three straight one-out hits against Jimenez. Andrelton Simmons and Arraez both singled and Polanco followed with his 11th homer of the season, a 375-foot line drive into the bleachers down the right-field line.

The Twins broke it open with four more runs in the eighth. Arraez drove in two runs with a bases-loaded double down the left field line and two more runs scored on a wild pitch by Ian Krol, the second one scoring when Haase lost control of the ball while attempting to throw to the plate, with the ball rolling into the camera well allowing a second runner to score.