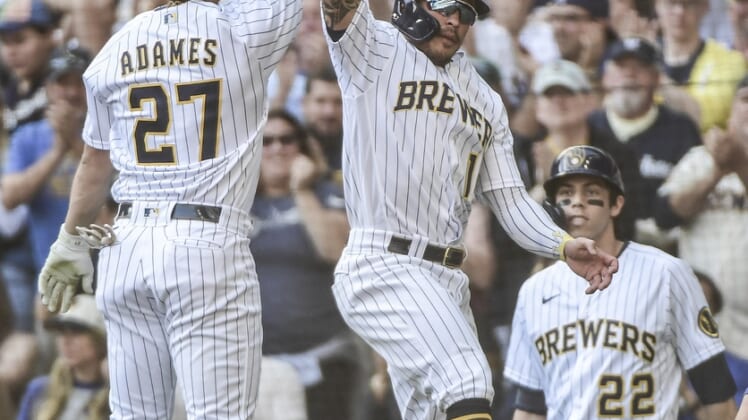 The Milwaukee Brewers clinched the National League Central Sunday afternoon when Willy Adames hit a first-inning two-run home run to give the hosts the lead for good in an 8-4 win over the New York Mets.

The division title is the fourth full-season division championship for the Brewers, who won the American League East in 1982 — the year the franchise reached the World Series for the only time — and the NL Central in 2011 and 2018.

The Brewers (94-62) will face the winner of the NL East in a National League Division Series.

The Brewers took control of the NL Central with an 11-game winning streak from June 22 through July 3, a span in which they went from tied with the Chicago Cubs to eight games ahead of the Cincinnati Reds. Their lead never fell below four games thereafter, though the clinching party was slightly delayed by the red-hot play of the St. Louis Cardinals, whose active 16-game winning streak included a four-game sweep of Milwaukee earlier this week.

The Brewers got no help from the Cardinals over the weekend, but Milwaukee, which entered the series with a magic number of three, trailed the free-falling Mets just twice — by 1-0 scores in the first inning Friday, when Kolten Wong answered with a leadoff homer, and Sunday, when Adames hit his two-run shot off Carlos Carrasco.

Christian Yelich had an RBI groundout in the second, and Eduardo Escobar laced a two-run single to extend the Brewers’ lead to 5-1. The Mets got within 5-4 on Javier Baez’s two-run double in the fourth and Kevin Pillar’s RBI single in the sixth, but errors by Jonathan Villar and Francisco Lindor helped Milwaukee score three runs (one earned) in the bottom of the sixth.

Freddy Peralta (10-5) earned the win after allowing four runs on five hits and one walk while striking out five over 5 1/3 innings.

Josh Hader closed out the win with a perfect ninth in a non-save situation. After Yelich caught Brandon Nimmo’s fly for the final out, Hader and catcher Omar Narvaez hugged and the Brewers streamed onto the field as confetti fell from the roof at American Family Field.