WATCH: Milwaukee Bucks cruise past Orlando Magic after leading by 41 at halftime 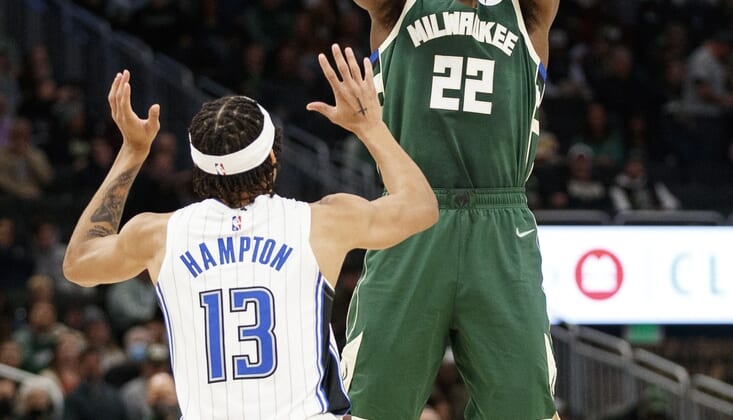 The Milwaukee Bucks recorded their largest halftime lead in franchise history — 41 points — and seven players scored in double figures as they dominated the Orlando Magic 123-92 Monday night to win their fourth consecutive game.

Jrue Holiday paced Milwaukee with 18 points and added six rebounds and four assists on 8-of-14 shooting from the field.

Reserve Pat Connaughton added 17 points thanks to five 3-pointers, Grayson Allen had 14 points, and Bobby Portis had 13 points to go with 11 rebounds to post his third straight double-double.

The Bucks have taken the past nine meetings with Orlando dating to 2019.

The Magic were without Cole Anthony (ankle injury) for the second straight game and were led by reserves Moe Wagner and R.J. Hampton, who had 18 and 14 points, respectively. Mychal Mulder and Robin Lopez each had 13, and Wendell Carter Jr. posted eight points, 10 rebounds and three assists.

Orlando has dropped six of its past seven games. The Magic shot 36.6 percent from the field against the Bucks.

After shooting 47.5 percent from 3-point range on Saturday night in a 117-108 win against Orlando, Milwaukee again was lethal from deep, making 18-of-45 (40.0 percent) shots from that distance on Monday.

Twelve players saw action for the Bucks, and all of them scored.

The Bucks wasted no time finding their offense, jumping to a 20-point lead by the end of the first quarter. Milwaukee made 12-of-21 (57.1 percent) shots to open play, six of which came from beyond the arc.