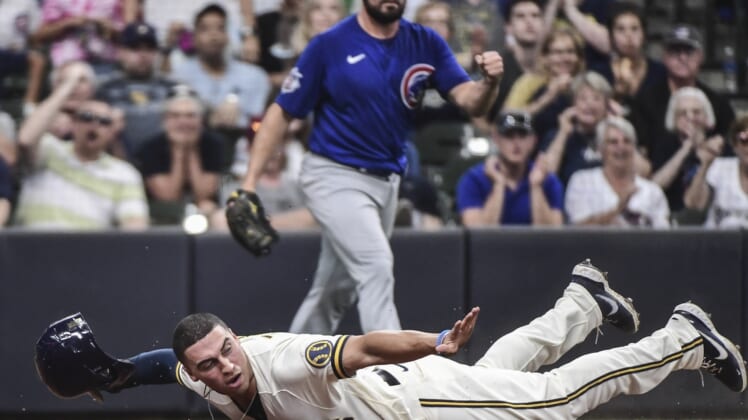 The host Milwaukee Brewers were down seven runs before stepping to the plate Wednesday afternoon. It did not seem to matter, as the Brewers scored 14 of their own in the next four innings and swept the Cubs with a 15-7 victory.

The Brewers scored one in the bottom of the first frame, five in the second and eight in the fourth en route to sending the Cubs to their sixth consecutive loss.

Milwaukee, which has won eight straight, chased Chicago starter Jake Arrieta in the second after pulling within a run.

Arrieta had two outs in the second with a 7-3 lead, but his own throwing error led to two runs coming in.

On that play, Chicago’s Patrick Wisdom collided with Tyrone Taylor at first base as he went chasing the errant throw. Wisdom left the game after appearing to be hit in the head.

Keston Huira then drove in Milwaukee’s sixth run of the day with an infield single.

In the fourth, the Brewers not only took the lead but blew things wide open.

With one out, Jace Peterson drove in a pair of runs on a single to give the Brewers an 8-7 lead. Milwaukee scored two more runs on an RBI single by Jackie Bradley Jr. and when Luis Arias was hit by a pitch with the bases load.

The bags were still full when Willy Adames came to the plate with two outs. Adames deposited a 1-1 pitch from Tommy Nance over the fence in right center near the Cubs bullpen to give the Brewers a 14-7 lead.

Milwaukee padded its lead in the sixth on a two-out homer from Urias (4-for-5, 4 RBIs).

The day did not start out all that hot for the Brewers after Aaron Ashby only lasted two-thirds of an inning in his big-league debut.

Chicago got to Ashby early with a pair of singles. With the bases loaded, Javy Baez drove in the first runs of the day on a two-run single.

Up 3-0, a bunt by Eric Sogard made it 4-0 before a wild pitch by Ashby allowed Jake Marisnick to score.

Ashby was pulled with two outs in the top of the first after walking Contreras to load the bases again. Miguel Sanchez came in and gave up a two-run single to Wisdom.