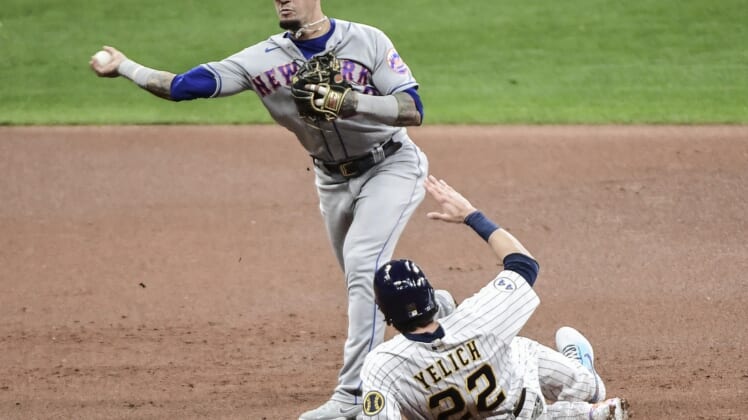 Eric Lauer recovered from a rough first inning to throw 6 2/3 strong innings for the host Milwaukee Brewers, who inched closer to clinching the National League Central title by beating the New York Mets 5-1 on Friday in the opener of a three-game series.

Lauer (7-5) tied a career high with nine strikeouts while yielding one run on three hits and two walks.

Willy Adames hit a go-ahead, two-run homer in the third inning and Christian Yelich followed with another round-tripper for the Brewers (92-62), who snapped a five-game losing streak while reducing their magic number to clinch the NL Central to two.

A late-season fade continued for the Mets (73-80), who were eliminated from wild-card contention before dropping their third straight and losing for the 11th time in 14 games. They trail the Atlanta Braves by 7 1/2 games in the NL East, a division New York led throughout June and July.

The Mets got off to a quick start against Lauer, who surrendered a leadoff triple to Brandon Nimmo and a run-scoring groundout to Francisco Lindor. New York loaded the bases with two outs when Pete Alonso reached on an error by Adames at shortstop before Michael Conforto drew a walk and Jonathan Villar singled. However, with his 39th pitch of the inning, Lauer struck out James McCann to escape further damage.

The Brewers immediately tied the game when Kolten Wong led off the bottom half by homering against Tylor Megill (3-6). Wong also sparked the third-inning rally by drawing a leadoff walk. Adames homered on Megill’s next pitch, and Yelich went deep two offerings later.

Yelich scored on Avisail Garcia’s sacrifice fly in the fifth.

Lauer didn’t allow another hit until Jeff McNeil chased him by beating out an infield single in the seventh. The left-hander, who threw a season-high 114 pitches, retired 16 of the final 18 batters he faced.