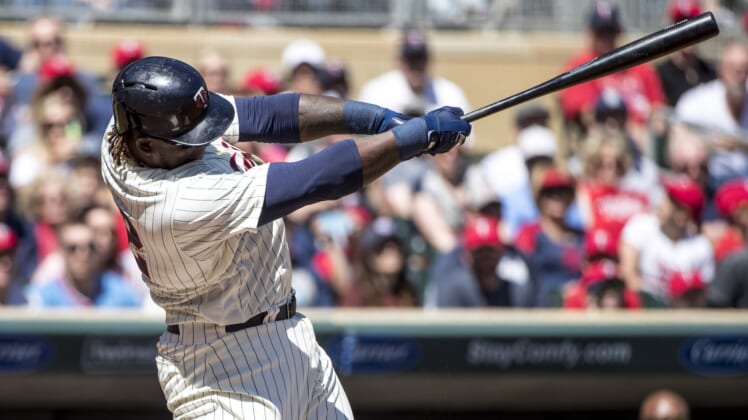 Miguel Sano homered and Byron Buxton singled, walked, stole a base and scored a run as the Minnesota Twins edged the Detroit Tigers 3-2 in the opener of a three-game series on Tuesday night in Minneapolis.

It was the 30th homer of the season for Sano, the second time in his career he has accomplished the feat. Sano joined Hall of Famer Harmon Killebrew, Justin Morneau, Brian Dozier, Gary Gaetti, Tom Brunansky and Bob Allison as players with multiple 30-homer seasons in Twins history.

Caleb Thielbar (7-0), one of six Twins pitchers, picked up the win for Minnesota (70-87), which snapped a two-game losing streak.

Alex Colome, despite giving up two runs and three hits in the ninth, picked up his 17th save and 15th since Aug. 1.

Isaac Paredes and Eric Haase each had a double and two hits and Miguel Cabrera extended his hitting streak to five games with a sixth-inning single for Detroit (75-82).

Tyler Alexander (2-4) didn’t allow a hit after the second inning and recorded 12 straight outs before leaving after six innings. He allowed one run on four hits, walked one and struck out six.

Minnesota took a 1-0 lead in the third inning without garnering a hit. Buxton led off with a walk, stole second, advanced to third on a flyout to right by Jorge Polanco and scored on a sacrifice fly by Mitch Garver.

Sano made it 2-0 when he led off the bottom of the seventh with a 410-foot homer off reliever Jose Urena to the back of the second deck in left.

Nick Gordon followed with a walk and advanced to third on a single by Willians Astudillo. Max Kepler then drove in Gordon with a sacrifice fly to extend the lead to 3-0.

Detroit made it interesting late, cutting it to 3-2 in the ninth on back-to-back two-out RBI singles by Akil Baddoo and Jonathan Schoop. But Colome then rebounded to strike out Robbie Grossman to end the game.