Jazz Chisholm and Jesus Aguilar each slugged a home run, leading the host Miami Marlins to a 4-1 win over the slumping Chicago Cubs, who lost their 11th straight game on Sunday afternoon.

The Cubs, who share the longest active losing streak in the majors with the Baltimore Orioles, were led by Frank Schwindel, who homered in the sixth inning.

Chisholm, a rookie, went 2-for-4 with one RBI. He has 12 homers this season, including his go-ahead, upper-deck shot on Sunday.

Aguilar went 3-for-4, including his two-run homer, his 22nd blast of the season. He leads the majors with 84 RBIs.

Alec Mills (5-5), who earned the victory the last time the Cubs won a game — which was on August 4 — took the loss. He lasted 5 2/3 innings, allowing two runs, seven hits and one walk, striking out four. 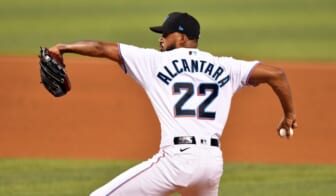 Miami starter Elieser Hernandez, pitching in the majors for the Marlins for the first time since June 3, tossed 5 1/3 strong innings but did not get a decision. Hernandez, recovered from a strained right quadriceps, allowed just one run, four hits and one walk, striking out four.

Miami opened the scoring in the fifth. Jorge Alfaro turned a routine single to left-center into a hustle double. One out later, he scored on Magneuris Sierra’s single.

The sixth inning produced a pair of solo homers. Chicago’s Schwindel tied the score with a 422-foot blast, and Chisholm drove a pitch 435 feet to give Miami a 2-1 lead.

In the bottom of the seventh, Chisholm started a two-out, none-on rally with a single. Aguilar followed with a line-drive homer that traveled 371 feet to left.

Chicago threatened again in the ninth as Jason Heyward singled, and Robinson Chirinos walked to lead off the inning. But Floro struck out Andrew Romine and Patrick Wisdom, and Rafael Ortega grounded out as Miami earned the three-game sweep.