The Miami Heat, setting a franchise record for most points in a season-opening game, used a 26-2 first-quarter run and 27 bench points from Tyler Herro to propel the locals to a 137-95 win over the visiting Milwaukee Bucks on Thursday night.

Miami also got 21 points from Jimmy Butler and 20 points and a game-high 13 rebounds from Bam Adebayo.

Milwaukee, which went nine consecutive minutes without a field goal in a brutal first quarter and never led in the game, was led by superstar Giannis Antetokounmpo, who had 15 points and 10 rebounds. Khris Middleton was held to 10 points.

Veteran point guard/six-time All-Star Kyle Lowry, Miami’s biggest offseason acquisition, missed his first five shots and finished with five points — on 1-for-8 shooting — and six assists. He didn’t make his first (and only) field goal until he swished a three-pointer from several feet beyond the line with 11:37 left in the third quarter.

Lowry, who appeared to sprain both ankles during the same second-quarter play, returned to the court just a few minutes later. 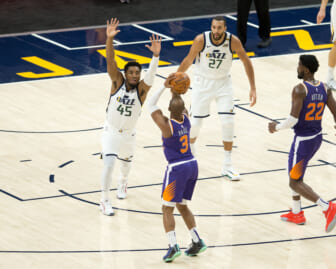 The Heat’s other newcomers this year are power forwards P.J. Tucker and Markieff Morris. Tucker started and had eight points and six rebounds. Morris had seven points and four rebounds off the bench.

Miami scored 19 consecutive points and led 40-17 after the first quarter. The quarter ended with Herro rushing up court and hitting a 35-footer at the buzzer. The Heat shot 60.0 percent from the floor in the first quarter while Milwaukee shot 22.7 percent.

Miami led by as many as 31 points in the second quarter before settling for a 72-43 halftime lead.

The Heat led 105-69 after three quarters, and they cruised from there.

For the game, Miami outrebounded Milwaukee, 58-38.