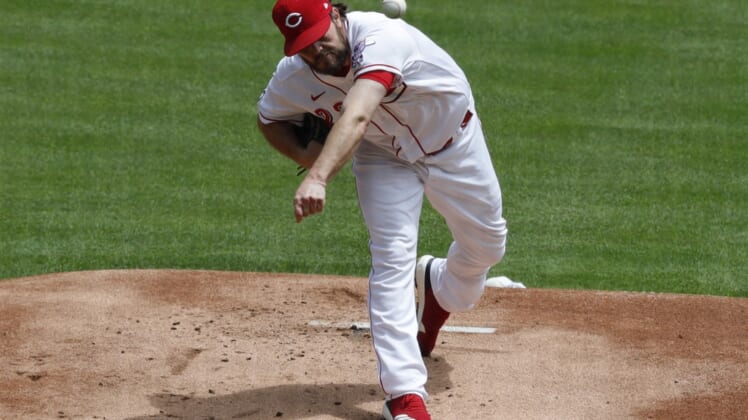 Max Schrock and Kyle Farmer drilled two-run homers, and Wade Miley allowed just one run over six innings in a return from the injured list as the host Cincinnati Reds pounded the slumping Philadelphia Phillies, 11-1, in a Memorial Day matinee.

Schrock finished just a single shy of the cycle before leaving with an apparent left leg injury following his seventh-inning double. Farmer drove in a career-high five runs and finished a triple short of the cycle.

National League batting leader Nick Castellanos singled in the fifth inning to extend his hitting streak to 17 games, matching Jose Altuve of the Houston Astros for the longest in the majors this season. Castellanos is now hitting .356, eight points higher than teammate Jesse Winker, who had the day off.

Miley (5-4) earned the victory, throwing 102 pitches in his first start since May 19, when he injured his left heel running out of the batter’s box and landed on the 10-day injured list. The Reds bullpen of Sean Doolittle, Brad Brach and Michael Feliz closed out Cincinnati’s win.

The Reds won their second straight game for the first time since winning the final two games of their series in Colorado (May 15-16). The Phillies lost their third straight and 11th in 15 games.

While the Phillies stranded four runners and did nothing with three hits over the first two innings against Miley, the Reds made the most of their chances against Phillies starter Vince Velasquez in the second.

Tyler Stephenson opened the inning by walking on four pitches. Schrock followed with his first home run in a Reds uniform, a two-run drive to the seats in right. Tyler Naquin’s sharp single to right field scored Tucker Barnhart and Shogo Akijama to make it 4-0 Reds.

The Phillies finally answered in the third when J.T. Realmuto’s groundout to short plated Jean Segura, cutting the Cincinnati lead to 4-1.

Farmer connected for the second Cincinnati homer of the day, a two-run line drive down the left field line for a 6-1 advantage in the third off Velasquez, who was pulled after only three innings. Velasquez (2-1) allowed five hits and six runs, with three walks and three strikeouts in suffering his first loss of the season.

The Reds added on with two more in the fifth and three runs in the seventh on a two-run double from Farmer and an RBI groundout from Akiyama.