Scherzer (5-4) gave up five hits and one run, struck out nine and walked one while throwing 108 pitches, 70 for strikes.

Brad Hand picked up the one-out save for his 10th in 12 opportunities.

Nationals manager Dave Martinez earned his 225th win, the most in franchise history.

Andrew McCutchen had two hits for the Phillies, who struggled to score one game after posting 17 runs on the road against the Cincinnati Reds. 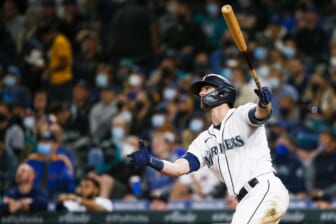 Alec Bohm singled to open the bottom of the third inning for the Phillies, the first hit for either team. Bohm was stranded at second to end the inning.

Trea Turner walked to begin the fourth for the Nationals and he eventually scored on an RBI double to left by Bell for a 1-0 lead.

The Phillies tied the game at 1 in the fourth when J.T. Realmuto hit an RBI single to center.

Soto blasted a solo home run to left in the sixth to put the Nationals ahead 2-1.

Scherzer struck out swinging with runners on first and second to end a scoring threat in the seventh.

McCutchen doubled with one out in the seventh and Bohm struck out swinging on a high fastball. Ronald Torreyes popped out to first for the third out.

Rhys Hoskins led off the ninth with a double off the wall in right, extending his hitting streak to 11. Travis Jankowski came in to pinch run and was picked off. Realmuto struck out swinging and Brad Miller flied out to center against Hand to end the game.