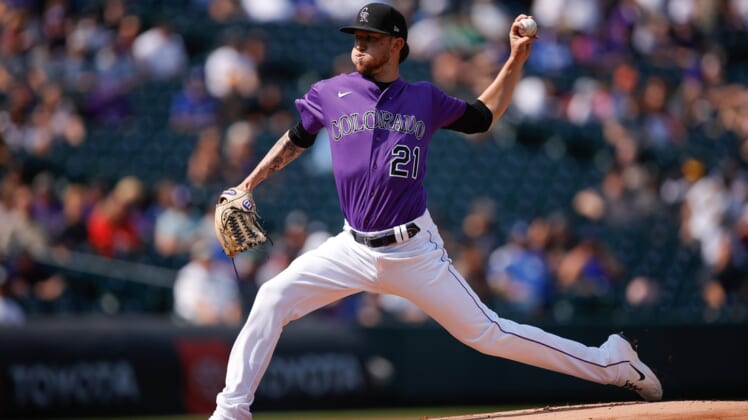 Max Muncy led off the 10th inning with a two-run homer and Corey Seager had four hits as the Los Angeles Dodgers rallied to beat the Colorado Rockies 7-5 in Denver on Thursday.

Trea Turner had three hits, A.J. Pollock and Gavin Lux each had two hits each for Los Angeles (98-55), which rallied with runs in the eighth and ninth innings to take two of three from Colorado.

Kenley Jansen (4-4) pitched the ninth and Blake Treinen worked the 10th for his sixth save.

Colorado led 5-3 but the Dodgers chipped away. In the eighth inning, Turner singled, stole second and came home on Pollock’s second double of the game to get within one.

With two outs in the ninth, Mookie Betts singled and Seager singled off pitcher Carlos Estevez’s right leg. Turner followed with a single to left to tie it.

Muncy put Los Angeles ahead when he homered on the first pitch from Lucas Gilbreath (2-2) in the 10th, his 35th of the season, with Justin Turner on second.

Pollock led off the second inning with a double and scored on a single by Austin Barnes. Lux singled and a double steal put runners on second and third. Kyle Freeland struck out the next two but Seager’s bloop single drove in two to make it 3-0.

Colorado responded in the bottom of the inning. Trevor Story and Cron led off with singles, and Hilliard’s double drove in Story. Following a strikeout and a flyout, Freeland delivered a two-run single to tie the game 3-3.

The Rockies took the lead in the fifth when Freeland led off with a walk and Tapia followed with his sixth homer of the year to make it 5-3.

In the first nine starts since coming to the Dodgers, Scherzer allowed five runs in 58 innings, a 0.78 ERA, which jumped to 2.28 after Thursday.