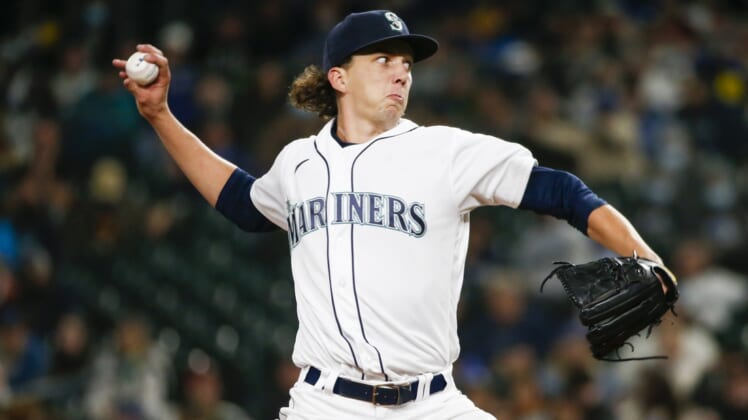 Jarred Kelenic hit a two-run double and Abraham Toro added a solo homer for the Mariners (89-70). Seattle won for the 10th time in 11 games and remained a half-game behind Boston in the race for the American League’s second and final wild-card playoff berth.

Despite home runs from Tony Kemp and Seth Brown, the A’s (85-74) took their 12th straight head-to-head loss to Seattle and their third straight defeat overall.

Reliever Diego Castillo (5-5) got the victory despite serving up Brown’s game-tying homer in the seventh. Drew Steckenrider pitched around a single in the ninth for his 13th save.

Right-handers Frankie Montas of Oakland and Logan Gilbert of Seattle both held the opposition scoreless for the first five innings.

Kemp led off the sixth by hitting a 2-1 pitch over the right field wall. It was just the third hit off Gilbert.

The Mariners responded in the bottom of the inning, thanks to a pair of Oakland errors.

France led off with a shallow fly ball to right that was dropped by second baseman Kemp. After Montas struck out Kyle Seager, Mitch Haniger hit what appeared to be an inning-ending double play ball to shortstop Josh Harrison. However, Harrison booted it, putting runners at first and second — the first time a Seattle player reached scoring position on the night.

Kelenic then lined a 2-0 pitch off the base of the wall in right-center, scoring both runners and giving the Mariners a 2-1 lead.

The A’s pulled level in the top of the seventh as Brown hit a solo shot with two outs.

Again, Seattle bounced right back in the bottom of the frame.

Pinch hitter Dylan Moore led off with a walk off Andrew Chafin (2-4) and moved to third on J.P. Crawford’s one-out single to left, just out of the reach of leaping third baseman Matt Chapman. France hit the next pitch to the warning track in left, easily scoring Moore on the sacrifice fly.

Toro provided an insurance run with a solo shot off Sergio Romo with two outs in the eighth.

Gilbert pitched 5 2/3 innings and gave up one run on three hits with two walks and four strikeouts.