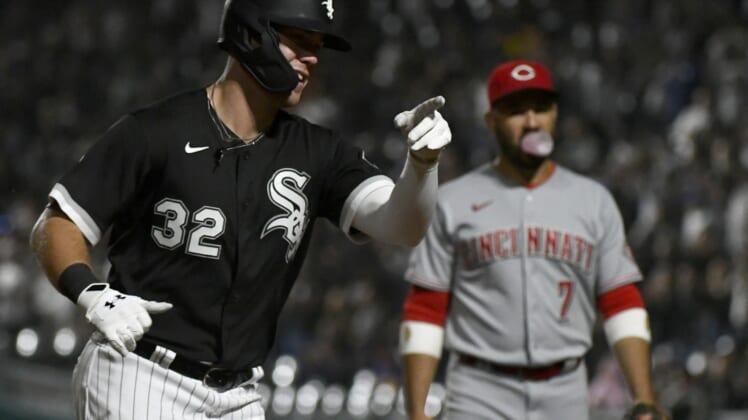 Chicago (90-68), which clinched the American League Central division crown last week, won its third straight to send Cincinnati (82-76) out of the running for the second National League wild card and snap the Reds’ four-game winning streak.

The White Sox earned the franchise’s first 90-win season since the 2006 club went 90-72. The 2008 White Sox, who secured Chicago’s most recent division crown before this season, won 89 games.

Moncada opened the second inning with another solo blast, and O’Brien was removed from the game after sandwiching a pair of walks around a strikeout. The right-hander fell to 0-1 after scattering two runs and two hits in 1 1/3 innings with three walks and two strikeouts.

Sheets’ fourth-inning shot against Cessa put Chicago ahead 3-0 before Sheets broke the game open with an RBI single in the sixth. A groundout scored another run. The support proved to be plenty for Lopez (4-3), who spaced one run and two hits in six innings with zero walks and four strikeouts to win for the first time since Aug. 27.

Eugenio Suarez launched a solo shot in the fifth, his 30th home run of the season, for the lone blemish against Lopez. Suarez joined Joey Votto and Nick Castellanos, who both singled Tuesday, as 30-home run hitters for the Reds.

Robert capped the scoring with a two-run blast in the eighth. Robert (three RBIs), Sheets (two) and Eloy Jimenez had two hits apiece for Chicago.

The White Sox improved to 2-1 against the Reds this season. The teams split a two-game series in Cincinnati in May.