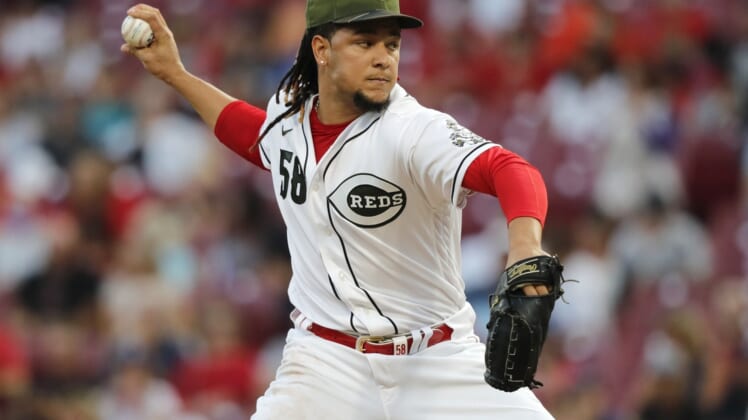 Kyle Farmer got revenge against the team that drafted him and Luis Castillo threw 6 1/3 shutout innings as the Cincinnati Reds beat the visiting Los Angeles Dodgers, 3-1, Friday night.

Luis Cessa retired all five batters in relief of Castillo and Michael Lorenzen allowed an RBI hit from Matt Beaty in the ninth but still recorded his fourth save. Lorenzen retired pinch-hitter Albert Pujols on a liner to center as the potential tying run to end the game.

Farmer, drafted as an All-American shortstop out of Georgia in 2013, doubled twice, including a two-run double in the sixth that provided valuable insurance for the Reds (77-71), who won consecutive games for the first time since Aug. 26-27 and remained hot on the trail of St. Louis and San Diego for the final National League wild card spot.

The Dodgers (94-54) had their six-game win streak snapped as they continue their chase of the San Francisco Giants atop the NL West.

The game figured to be a pitcher’s duel and more than met those expectations.

Walker Buehler (14-4) showed why he’s a favorite in the National League Cy Young race by overpowering the Reds hitters early. The Reds didn’t have a hit until Jonathan India’s two-out single in the third.

Castillo (8-15) gave up a leadoff double to Mookie Betts to open the game. Three batters later, Corey Seager walked. But Castillo escaped that jam by getting Justin Turner to ground into a force out.

The Reds finally broke the scoreless tie in the fifth when Farmer lined a double down the right field line to open the inning. Tucker Barnhart followed with a single to center that scored Farmer for a 1-0 Cincinnati lead.

The Dodgers immediately responded by mounting a threat in the sixth. With one out, Trea Turner and Seager singled to center. But Castillo retired Justin Turner on a fly ball to left-center and Will Smith on another to right to end the threat, the first two fly ball outs recorded by Castillo.

Nick Castellanos and Joey Votto singled with one out in the sixth and Farmer delivered again with a two-out double down the left field line, putting Cincinnati up, 3-0.

Castillo was lifted for Luis Cessa after allowing a one-out single to Matt Beaty on his 111th pitch of the night, a season high total. Castillo struck out 10 and walked two while allowing five hits.

Jesse Winker started and played in center field for the first time since 2019, when he played the position 16 times. Winker, who returned from an intercostal strain, appeared to wince on a swinging strike in the eighth before leaving the game when hit by a fastball from Brusdar Graterol on the next pitch.