UofL quarterback Malik Cunningham is sacked during the first half Friday evening as the Louisville Cardinals took on the University of Central Florida at Cardinal Stadium. The Cardinals led 21-14 at halftime. Sept. 17, 2021As 4148 Uofl Ucf 1sthalf351

Louisville’s Jaylin Alderman stunned the home crowd by returning an interception 66 yards for the game-winning score in the closing seconds Friday night, lifting the Cardinals to a 42-35 win over the UCF Knights in Louisville, Kentucky.

UCF’s Tre’mon Morris-Brash batted a pass and intercepted it inside the last minute, but on a rare blitz by Louisville, Gabriel’s pass on the next play bounced off receiver Amari Johnson and right to Alderman, who took it the distance for the win with 13 seconds left.

Playing injured most of the fourth quarter, Louisville’s Malik Cunningham was 23-of-38 for 265 yards and one touchdown. He rushed for 99 yards and two touchdowns.

Jalen Mitchell rushed for one, and Marshon Ford (career-high eight catches, 100 yards) and Trevion Cooley caught scores for the Cardinals (2-1).

Gabriel connected with O’Keefe for a 41-yard strike on the Knights’ second play from scrimmage at 12:22, but Cunningham tied it with a 7-yard scramble with 1:47 remaining. 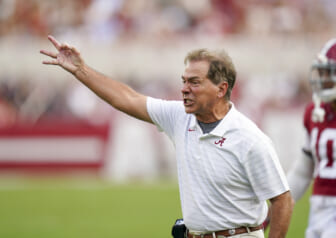 However, on a fourth-down play early less than a minute into the second quarter, Gabriel tossed a pass 15 yards in the end zone to Robinson, who made a spectacular one-handed grab.

Mitchell plunged in from two yards to knot it at 14 at 9:38, and Cunningham guided the Cardinals 56 yards in six plays, flipping a 1-yard TD pass to Ford for a 21-14 halftime lead.

UCF scored on its first series of the second half with trickery, as Gabriel — after a lateral throw to O’Keefe — took a return pass from the wide receiver and scooted 20 yards at 10:59.

Cunningham’s second rushing TD was Louisville’s only score of the third, and Gabriel’s 6-yarder on a slant to Tennessee transfer Johnson made it 28-all early in the fourth.

Louisville countered UCF’s earlier trick play as receiver Braden Smith took a lateral from Cunningham and put the Cardinals back out front with a 45-yard score to Cooley with 9:15 to play.

Gabriel rushed six yards for the tying score with 1:21 remaining in regulation.