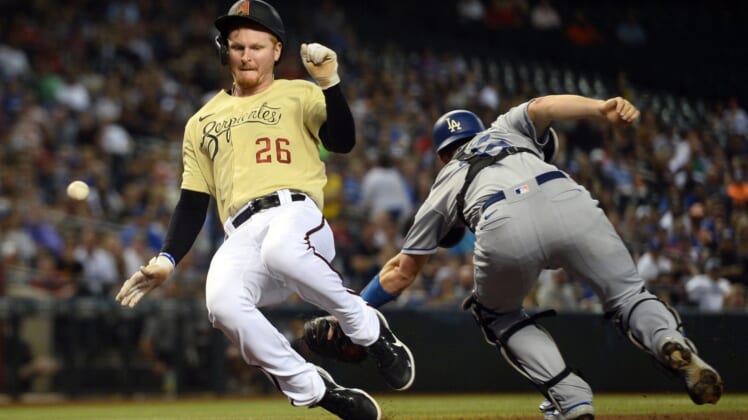 AJ Pollock hit a home run and Tony Gonsolin pitched five solid innings as the Los Angeles Dodgers won for the 11th time in their last 13 games with a 4-2 victory Friday over the host Arizona Diamondbacks in Phoenix.

Justin Turner and Will Smith each drove in runs as the Dodgers (99-55) improved to 5-2 on their final road trip of the season, which has two games remaining at Arizona.

Kole Calhoun hit a home run as the Diamondbacks (49-105) lost for the ninth time in their last 11 games.

The victory kept the Dodgers one game behind the National League West-leading San Francisco Giants, who earned a 7-2 victory over the Colorado Rockies to win for the 14th time in their last 18 games. The Giants and Dodgers each have eight games remaining.

The Dodgers jumped in front with a three-run second inning. Smith led off with a double and Turner singled him home for the game’s first run. Pollock followed with a home run to left-center field against his former team, his 17th of the season and first since returning from the injured list Wednesday because of a left hamstring strain.

The Diamondbacks answered quickly with Calhoun’s home run, his fifth of the season. Arizona then pulled within a run at 3-2 in the fifth inning on Josh VanMeter’s RBI single to left.

Gonsolin (4-1) allowed two runs on three hits over his five innings of work with no walks and seven strikeouts. It was his fourth outing and third start since returning from the IL earlier this month because of right shoulder inflammation.

The Dodgers added a run in the sixth inning on a sacrifice fly from Smith to bring home Trea Turner, who doubled and went to third on a single by Max Muncy.

Dodgers closer Kenley Jansen pitched a scoreless ninth inning for his 35th save in 40 chances, as Los Angeles left fielder Chris Taylor made one diving catch and one sliding catch in foul territory in the final inning to help preserve the victory.