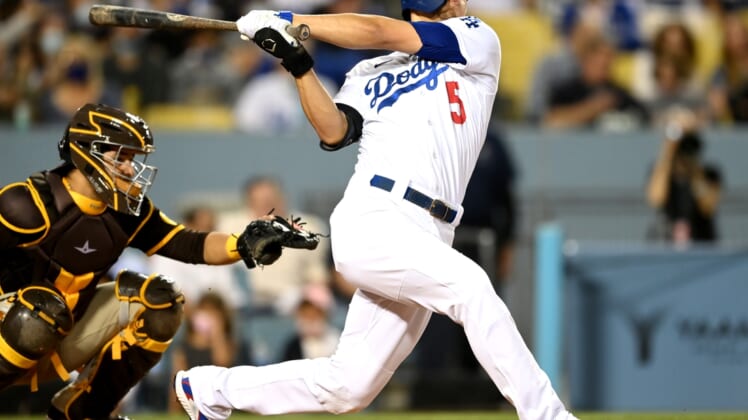 Another day, another onslaught of Dodgers home runs.

Mookie Betts and Corey Seager belted consecutive home runs to open the first inning, and Justin Turner and AJ Pollock went back-to-back in the fourth as the Dodgers held off the Padres one day after they hit six long balls in a comeback victory over San Diego.

Seager added another home run in the seventh inning.

The Dodgers (103-56) have won nine of their past 11 games and will head into the weekend trailing the first-place Giants by two games in their bid for a ninth consecutive National League West title. San Francisco beat the Arizona Diamondbacks 5-4 minutes after the Dodgers’ game ended.

Ha-Seong Kim and Fernando Tatis Jr. homered for the Padres, who lost their ninth consecutive meeting with the Dodgers and were swept by their division rival for the third consecutive series.

Tatis’ two-run home run in the fifth inning was the sixth ball ever hit out of Dodger Stadium after his blast bounced off the top of left field pavilion roof. The shot was measured at 467 feet.

The Dodgers took a 2-0 lead two batters into the game when Betts hit his 23rd of the season and Seager socked his 14th. Seager hit a go-ahead home run in the eighth inning Wednesday as the Dodgers prevailed 11-9.

Kim pulled the Padres within a run at 2-1 with his eighth of the season, a second-inning shot to left-center field against Dodgers right-hander Tony Gonsolin.

The Dodgers’ second set of consecutive home runs came in the fourth when Turner hit his 26th of the season and Pollock hit his 20th. The four early home runs came against Padres starter Vince Velasquez (3-9).

After Tatis’ mammoth blast got the Padres within a run at 4-3, the Dodgers began to pull away in the sixth with RBI singles from Will Smith and Cody Bellinger as well as a run-scoring sacrifice fly from Pollock.

Gonsolin gave up three runs on four hits over 4 2/3 innings, while Corey Knebel (4-0) pitched 1 1/3 scoreless innings to earn the victory.

Velasquez yielded six runs on six hits and a walk in 4 2/3 innings. He struck out seven.