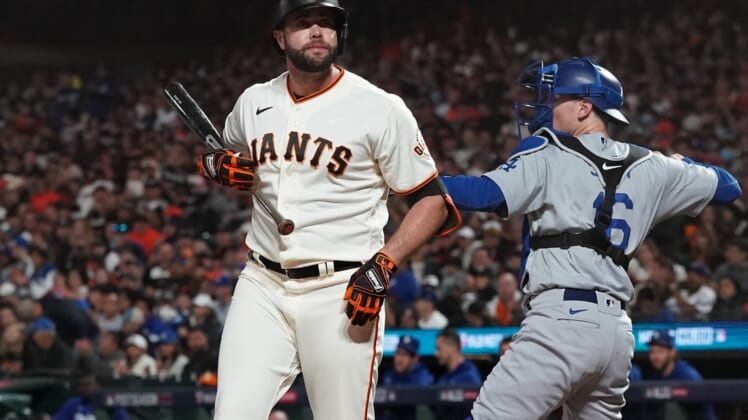 Chris Taylor responded to his first start of the postseason with two hits and three runs scored Saturday night, igniting the Los Angeles Dodgers to a 9-2 romp over the host San Francisco Giants in Game 2 of their National League Division Series.

Aided by left-hander Julio Urias’ five strong innings, the Dodgers evened the best-of-five series that now heads to Los Angeles for Games 3 and 4.

Urias (1-0) contributed a two-out, RBI single to a two-run second inning before watching his teammates, shut out by three Giants pitchers in Game 1, bust out for the first time in the series with a four-run sixth.

With Los Angeles clinging to a 2-1 lead, Trea Turner’s double set the stage for two-run doubles by Cody Bellinger and A.J. Pollock after the Giants pulled starter Kevin Gausman (0-1) three batters into the inning.

Making his first career postseason start, Gausman was charged with four runs on four hits in 5 1/3 innings. He walked three and struck out seven.

The Dodgers made it a blowout with a three-run eighth that featured a solo home run by Will Smith. Taylor and Pollock both singled in the inning before pinch-hitter Matt Beaty and Corey Seager provided RBI singles.

Urias, who left for a pinch hitter in the Dodgers’ four-run sixth, limited the Giants to one run and three hits. He walked one and struck out five in improving his career postseason record to 7-2.

Donovan Solano and Brandon Crawford drove in the Giants’ runs, Solano with a sacrifice fly in the second and Crawford with an RBI single in the sixth.

Pollock and Smith scored twice apiece for the Dodgers, who had totaled just three runs in their first two postseason games, including a 3-1 win over the St. Louis Cardinals in the NL wild-card game.

Buster Posey had three hits and Crawford two for the Giants, who were outhit 11-6.