Scherzer (10-4) allowed four hits, struck out seven and walked two for his 185th career win. He beat the Mets for the 13th time and won his eighth straight decision in New York against them since May 17, 2016.

Muncy hit a pair of two-run homers in the second and sixth as the Dodgers beat the Mets for the 13th time in their past 14 trips to New York.

Justin Turner hit a two-run homer three batters in off New York’s Carlos Carrasco (0-1) and Will Smith hit a solo shot two batters later to give Scherzer a 3-0 lead before the right-hander threw a pitch.

Trea Turner added an RBI double in the second before Muncy’s first homer. 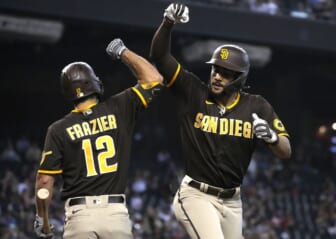 Scherzer also helped the offense with a sacrifice fly in the sixth that preceded Muncy’s second homer. It was Scherzer’s 30th career RBI and first career sacrifice fly.

Los Angeles padded the lead in the eighth on Smith’s two-run single and Chris Taylor’s RBI double. Matt Beaty slugged a two-run homer in the ninth off New York infielder Brandon Drury before New York outfielder Kevin Pillar got the final out of the inning.

Jeff McNeil and Michael Conforto hit RBI groundouts for the Mets, who were 2-for-29 with runners in scoring position in the series and lost for the 14th time in 21 games. New York’s other runs came in the seventh when Brandon Nimmo scored on a wild pitch and J.D. Davis lifted a sacrifice fly.

Related: If you’re a fan of the Los Angeles Dodgers, check out #Dodgers rumors, rankings, and news here

Carrasco was rocked for six runs and six hits in two innings.