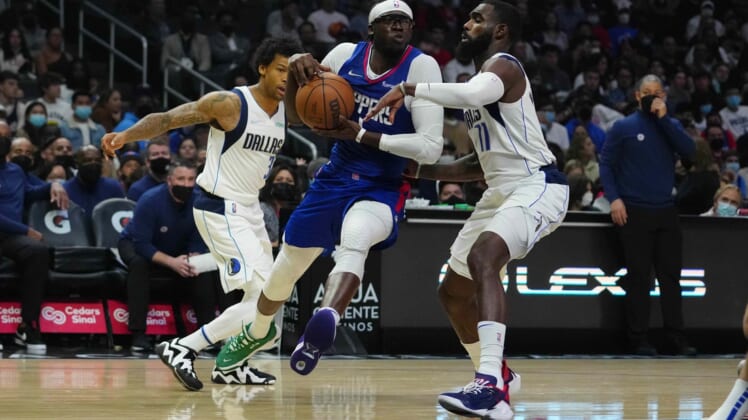 Luka Doncic returned from a three-game absence in style, scoring 26 points as the visiting Dallas Mavericks earned a 112-104 overtime victory over the Los Angeles Clippers to end a three-game losing streak.

Doncic added nine rebounds and nine assists as he returned from both left knee and ankle sprains. Kristaps Porzingis added 30 points for the Mavericks.

Reggie Jackson had 31 points, while Paul George added 26 as the Clippers split a two-game set with the Mavericks after beating them 97-91 on Sunday.

The Clippers went on an 11-1 run over the final 1:29 of regulation to send the game into overtime, getting a 3-pointer from George to tie it 103-all at the buzzer. The Mavs responded with a 7-0 run to open the extra period, capped by a Porzingis dunk.

The Clippers got 10 points in 31 minutes from Marcus Morris Sr., who missed the previous 15 games with a knee injury. But Los Angeles was without Nicolas Batum for the second consecutive game as he went into health and safety protocols for a minimum of 10 days.

The Clippers led by as many as 11 in the first quarter and were up 48-42 at halftime after Dallas opened the game 0 of 13 from 3-point range.

The Mavericks found a flow after the break, shooting 56 percent in the third quarter and taking an 80-76 lead as Sterling Brown hit a leaning 27-foot 3-pointer to close out the period.

The Clippers scored the next eight points to get within 102-100 before Kleber hit a free throw to put Dallas up 103-100 with 1.9 seconds remaining. The Clippers had 1.1 seconds left in regulation when George slipped into the right corner to make his tying 3-pointer.

Dorian Finney-Smith had 17 points for Dallas, while Tim Hardaway Jr. added 13. Ivica Zubac had 10 points for the Clippers.