Paul George scored a game-high 23 points in just 27 minutes Saturday night as the host Los Angeles Clippers made it three wins over the Minnesota Timberwolves in 11 days with a 129-102 shellacking.

Reggie Jackson had 21 points, while Ivica Zubac and Isaiah Hartenstein both put up double-doubles for the Clippers, who won their seventh straight game by taking advantage of a generally flat Timberwolves effort one night after they shocked the Los Angeles Lakers on the same court.

Anthony Edwards paced the Timberwolves with 21 points after he had contributed just nine points to Friday’s 107-83 win over the Lakers.

The Clippers ran off to 11- and 20-point wins at Minnesota last week, but the clubs battled on even terms for almost 11 minutes on Saturday before Luke Kennard hit consecutive 3-pointers to give Los Angeles the upper hand for good.

The Clippers broke the game open with a 14-0 flurry midway through the second period that created a 57-34 advantage. Eric Bledsoe and Terance Mann contributed 3-pointers to the run.

Mann finished with 16 points and Bledsoe 14 for the Clippers, who shot 53.5 percent overall and 40 percent on 3-pointers. Bledsoe also accumulated a game-high nine assists.

George finished 10-for-17 from the field and 3-for-5 from long range, while also finding time for nine rebounds and four assists as the Clippers won their fourth straight to open a six-game homestand. 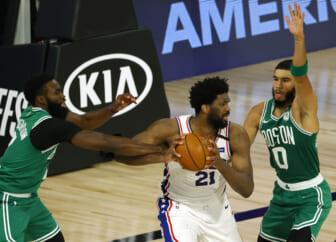 Edwards was 9-for-22 shooting from the field, and he also led the Timberwolves with nine rebounds.

D’Angelo Russell had 15 points and a team-high eight assists, while Jaden McDaniels also totaled 15 points off the bench for Minnesota, which shot 39.2 percent overall and 30.6 percent on 3-pointers.

One night after pouring in 29 points against the Lakers, Karl-Anthony Towns was held to eight points on 3-for-11 shooting.

The loss was the Timberwolves’ seventh in their last eight games.