Lorenzo Cain belted his third career grand slam to highlight a six-run fifth inning to fuel the visiting Milwaukee Brewers to a 10-3 victory over the Cleveland Indians on Friday.

Eduardo Escobar homered to lead off both the fifth and sixth innings to send Milwaukee (87-55) to its ninth win in its last 12 games. Luis Urias had a two-run shot to atone for a pair of errors in the field.

The Brewers tied a franchise record with their 47th road victory of the season. The 1982 club finished with a 47-33 record away from home.

Bobby Bradley had a two-run single in the first inning and finished with two of the three hits for the Indians (69-70), who have lost six of their last eight games.

Milwaukee claimed a 3-2 lead in the fourth inning after Omar Narvaez doubled to right field before coming home on Urias’ blast. Urias deposited a 2-2 slider from rookie Eli Morgan (2-7) for his 20th homer of the season. 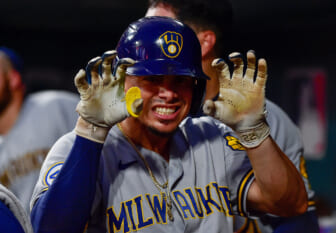 Also Read:
The Milwaukee Brewers and Tampa Bay Rays are both winning the Willy Adames trade

Escobar doubled the advantage in the fifth inning after sending a first-pitch fastball from Morgan over the wall in right field.

Urias gave the Brewers a 5-2 lead after reaching first base on catcher’s interference before Cain provided the big blow just two batters later with the bases loaded. He crushed a 2-1 slider from Sam Hentges over the wall in left field for his eighth homer of the season.

Escobar wasn’t done as he jumped on a first-pitch fastball from Hentges in the sixth. The homer was his 27th of the season and third in his last two games.

Milwaukee scratched for a run in the first inning after Kolten Wong scored following a fielding error by catcher Ryan Lavarnway.

Cleveland answered in the bottom of the inning as Myles Straw reached on a throwing error from Urias before advancing to second on a walk by Jose Ramirez. Both runners moved up by stealing a base before coming home on Bradley’s single to center to give the Indians a 2-1 lead.