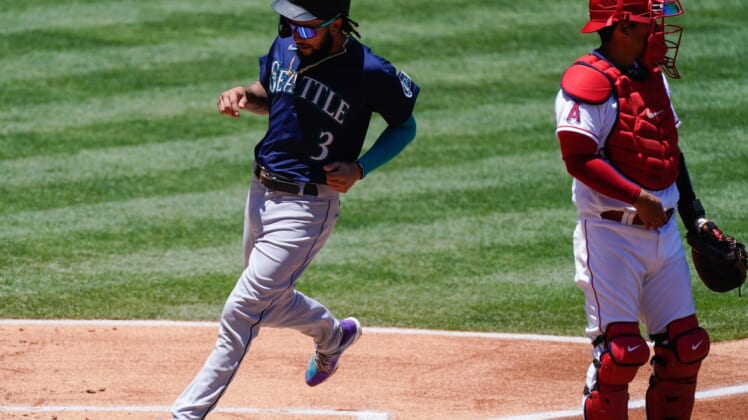 Donovan Walton homered for the Mariners, who split the four-game series.

Gilbert (1-2), a first-round pick in 2018, went five innings and allowed one run on two hits. The right-hander walked four and struck out seven.

On his first pitch, Gilbert allowed a home run to the Angels’ Justin Upton. But Los Angeles was 0-for-5 with runners in scoring position against the rookie.

The Mariners took a 1-0 lead in the first as J.P. Crawford led off with a walk against Angels left-hander Patrick Sandoval (0-2) and moved to second on a wild pitch. With one out, Ty France reached on an infield single that moved Crawford to third. Kyle Seager then lofted a sacrifice fly to left field.

Upton tied it with a solo shot to left-center field in the bottom of the inning.

The Mariners took the lead with two runs in the third. Walton hit Sandoval’s first pitch of the inning over the fence in right field to make it 2-1. Crawford doubled and Mitch Haniger singled, both to right, sending Crawford to third. France lined out to second, but Seager grounded a single into center field to give Seattle a two-run lead.

The score remained 3-1 until the seventh. With one out in the top of the inning, Walton and Crawford hit back-to-back doubles to right field.

The Angels made it 4-2 in the eighth as Anthony Rendon led off with a single and Jared Walsh hit a run-scoring double to right.

The Angels scored three in the ninth off former teammate Keynan Middleton, with RBI doubles from Upton and Rendon and a run-scoring groundout by Juan Lagares.

Sandoval pitched six innings and allowed three runs on five hits. He walked one and struck out a career-high 10.