Rivalry games are key to the popularity of Major League Soccer, and Saturday’s “El Trafico” between the LA Galaxy and host Los Angeles FC didn’t disappoint in the slightest.

The two Southern California sides played an up-and-down, high-scoring match that ended in a 3-3 draw at Banc of California Stadium.

Brian Rodriguez scored two goals for LAFC (6-9-6, 24 points) and newcomer Dejan Joveljic scored twice for the Galaxy (11-8-3, 36 points) in just his fourth game with the club.

LAFC was ahead 3-2 in the late minutes of the second half, but Kevin Cabral put in a shot off a sliding LAFC defender in the 86th minute to tie the score.

Neither team could break the deadlock before the final whistle.

Joveljic opened the scoring with a chip into an open net in the 20th minutes after the Galaxy couldn’t clear a loose ball in the box. In the 43rd minute, a foul in the box on the Galaxy gave the home side a penalty kick, and Cristian Arango buried it despite the ball glancing off a post.

The action picked up in the second half, and right away. Jonathan Bond tipped an LAFC shot over the net for a save in the 46th minute, but that was a precursor of things to come.

On the other end, LAFC goalie Tomas Romero came up with a save of a Cabral header in the 52nd minute.

The 58th minute saw two tremendous saves from Bond, but the ball came to Rodriguez, who dribbled his way around and past two defenders before his shot from the side of the net found the back of it for a 2-1 LAFC lead.

The Galaxy tied it at 2 with Joveljic’s second goal, this one in the 64th minute. It prompted a celebration with Galaxy fans in attendance.

Rodriguez put LAFC in front again, putting in the rebound of a saved shot in the 66th minute, two minutes after the Galaxy had drawn even. 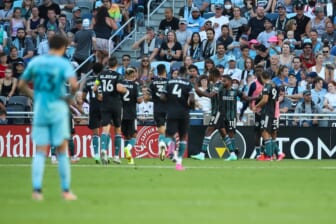