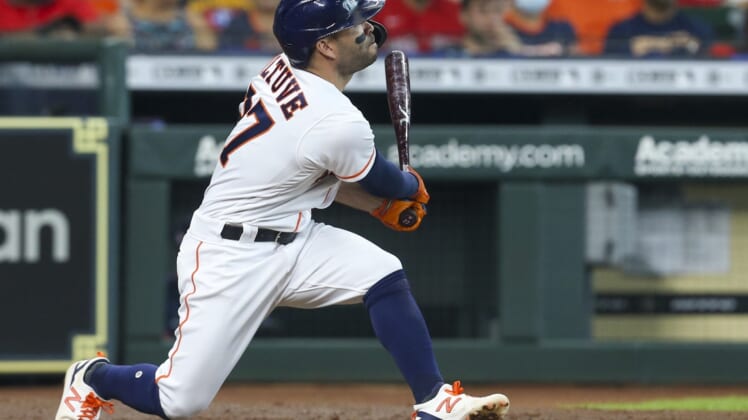 Jose Urquidy delivered an exceptional outing in his return from the injured list while Kyle Tucker capped a productive month with another multi-hit and multi-RBI effort as the Houston Astros won the opener of their four-game home series against the Boston Red Sox 11-2 on Monday.

Urquidy (4-2) missed two turns in the rotation after leaving his previous start against the Los Angeles Angels with right posterior shoulder discomfort on May 12. Urquidy had allowed two or fewer runs in four consecutive starts and resumed that excellent pitching, retiring the first 11 batters he faced before issuing a two-out walk to J.D. Martinez in the fourth inning.

Urquidy pitched around a two-out double by Boston catcher Christian Vazquez in the fifth before digging deep to complete the sixth, recording back-to-back strikeouts of Martinez and Xander Bogaerts to strand Alex Verdugo at second after Verdugo plated Hunter Renfroe with a double.

Urquidy allowed one run on three hits and one walk with a season-high nine strikeouts. He threw 87 pitches, 61 for strikes, and generated 10 swings and misses on 53 fastballs.

The Astros were quick to provide Urquidy run support, posting two-run frames against Red Sox left-hander Eduardo Rodriguez (5-4) in the second and third. Tucker scored the second run in the second thanks to some heads-up baserunning by Aledmys Diaz, who extended a rundown between first and second to allow Tucker to cross the plate before an inning-ending double play.

Jose Altuve smacked a two-run homer off Rodriguez in the third for a 4-0 lead, with his seventh home run this season the 140th of his career to match Bob Watson for eighth in club annals.

Houston chased Rodriguez in the fifth, with Tucker delivering a two-run single off reliever Colten Brewer one batter after Carlos Correa walked to load the bases. Altuve and Alex Bregman scored on the Tucker hit and both were charged to Rodriguez, who allowed six runs on seven hits and two walks with four strikeouts in 4 2/3 innings for his fourth consecutive losing decision.

Tucker added another two-run single as part of the Astros’ five-run sixth inning. He finished 3-for-5 with four RBIs and hit .296 with six home runs and 20 RBIs over 27 games in May.