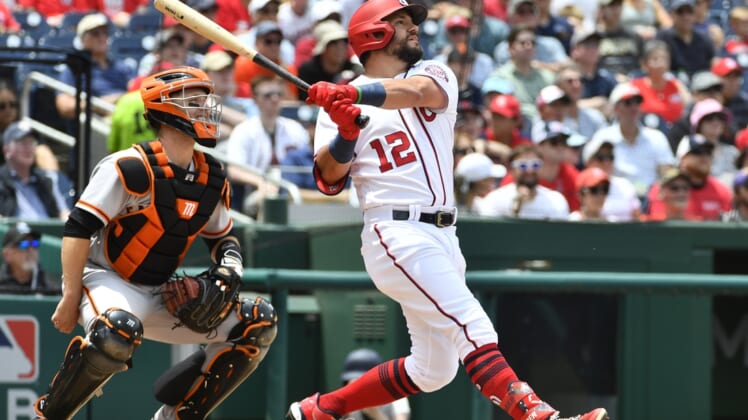 Kyle Schwarber hit a pair of home runs and Joe Ross pitched eight shutout innings for the first time in his career to lead the host Washington Nationals to a 5-0 victory over the San Francisco Giants on Sunday afternoon.

Schwarber went 2-for-4 with four RBI, and his early offensive outburst helped Washington split the four-game series, which began an 11-game homestand. With the loss, the Giants finished 3-3 during their six-game road trip.

Ross (3-6) posted a season-high nine strikeouts on 108 pitches as the eight-inning stint matched his career high and marked his longest outing since May 23, 2017. Ross gave up five hits, including three doubles, but did not walk a batter.

Before Schwarber’s leadoff homer (his seventh of his career and second in as many days), and his three-run homer in the second inning off Giants starter Johnny Cueto, the Nationals had scored only three runs over the first three games of the series.

The Giants were held to only three runs in the series and have scored only six runs in their past five games.

Schwarber followed up his 407-foot blast in the first with an even more impressive 426-foot, three-run blast to center field to give Washington a 4-0 lead in the second.

Alex Avila opened the second inning by reaching on a sharp single that deflected off Cueto toward shortstop Brandon Crawford. Cueto compounded his issues with a fielding error that allowed Victor Robles to reach on a sacrifice bunt.

Josh Harrison went 4-for-4 for the Nationals, including a double in the fifth, after which he scored the Nationals’ fifth run on a double by Starlin Castro.

After surrendering a one-out double to Mike Yastrzemski in the first, Ross retired 13 consecutive batters before giving up a two-out single to Donovan Solano in the fifth.