UAE Warriors alum Fialho had a tough task in his promotional debut in January when he was booked against seven-fight UFC veteran Michel Pereira. Despite an admirable effort where he had his moments, he came up short and saw a four-fight win streak ended.

However, that was not the case in his Octagon return on April 16. This time around he was matched up with a talented fighter, but one on the opposite side of the confidence spectrum in Miguel Baeza, on the heels of back-to-back losses.

Early on, Baeza showed why oddsmakers set him as the favorite going into the fight. He landed clean and crisp shots as he worked in and out of the Portuguese fighter’s range. Yet, it was far from one-sided as Fialho stalked him and was landing good strikes of his own.

As the opening round of their UFC Vegas 51 fight played out you could see the momentum build on the side of Fialho. With a minute left, the Floridian’s nose was bloody and he was getting hit more frequently with shots. Then things came crashing down for “Caramel Thunder” with 30 seconds left in the round.

With two clinched up after an exchange, Fialho landed a barrage of uppercuts that wobbled his foe. Baeza tried to escape on spaghetti legs but his opponent chased and landed a hook that sent him down to the canvas hard. While on the mat, Baeza was on the wrong end of some nasty hammer fists that put him temporarily to sleep and forced the referee to jump in to stop the fight with 22 seconds left in the round. 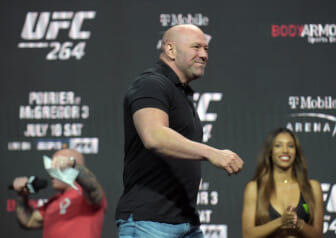 Also Read:
Could the Dana White and De La Hoya feud be over? Oscar says he wants to ‘patch things up’ with UFC boss

The victory was the twelfth knockout in Fialho’s 15 wins and moved his record to 15-4. The loss was a third straight for Baeza and took his record to 3-3 in the Octagon, and 10-3 overall.