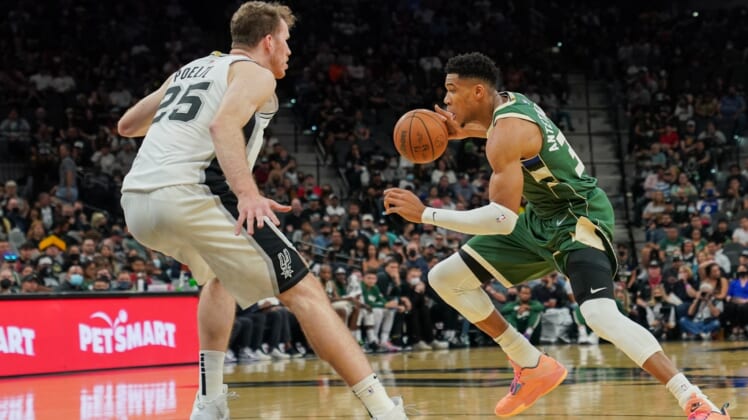 Khris Middleton scored 28 points as the visiting Milwaukee Bucks played their best in the final quarter on the way to a 121-111 win over the weary San Antonio Spurs on Saturday.

The Bucks used a four-point play by Middleton and a four-point possession after a clear path foul by the Spurs at the 8:30 mark of the fourth quarter to build a 101-91 lead. San Antonio never made a serious run the rest of the way.

The game was the second of a road-home back-to-back for the Spurs, who flew back to the Alamo City early Saturday morning after a loss in Denver on Friday.

Giannis Antetokounmpo added 21 points for the Bucks, who rebounded from a blowout loss in Miami on Thursday to move to 2-1. Jrue Holiday and Pat Connaughton hit for 16 points each, George Hill scored 15 off the bench and Grayson Allen added 10 points for Milwaukee.

The game was tied at 32 after the first 12 minutes. The Bucks shot 66.7 percent from the floor in the period and San Antonio countered with 11 points from McDermott.

Milwaukee swept to the lead midway through the second quarter and expanded its advantage to as many as six points before settling for a 56-52 lead at the break.

Antetokounmpo led the Bucks with 12 points in the half, with Middleton adding 10. Milwaukee outshot the Spurs 41.2 percent to 22.2 percent from long range over the first two quarters and outrebounded San Antonio 22-17.

Walker IV led all scorers with 13 points in the first half with McDermott hitting for 11.