After a competitive first round, Khalil Rountree brutally kicked and punched his way to a knockout win over Karl Roberson at UFC Vegas 50.

The main card matchup between Rountree and Roberson was expected to create fireworks inside the UFC APEX in Las Vegas, Nevada. And at the start of the fight, it certainly delivered as both threw heavy strikes at each other over the first couple of minutes of the bout.

However, likely sensing the danger they were each in, as the round played out they both settled into more measured approaches. “Baby K” was very game earlier for his first fight at light heavyweight in over three years, but despite being the smaller man, it was actually Rountree that was clearly the faster fighter. And it just seemed like a matter of time before he would land a strike Roberson didn’t see coming.

After that show of lighting in the first round, the thunder showed up in early the second round. During an exchange in the opening seconds of the frame, “The War Horse” landed a big right hand the dropped the native of New Jersey. With his opponent hurt, there was now blood in the water and the 32-year-old went feral.

With Roberson on the mat and his back against the cage, Rountree unleashed a nasty kick to the body that definitely hurt his opponent again. Realizing he could not remain there, Roberson returned to his feet and tried to escape the bombardment. But Rountree was there waiting for him with a couple of powerful haymakers that dropped his foe once again. This time it forced the referee to jump in and stop the action at 4:34 of the second round.

The victory moved Rountree’s record to 10-5 and it was the seventh knockout win of his career. He has now won back-to-back fights following a two-fight losing skid. 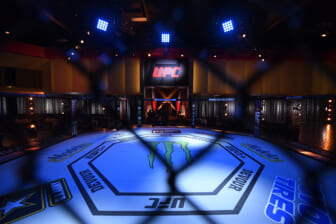 Roberson’s record fell to 9-6 and he has lost three straight inside the Octagon.