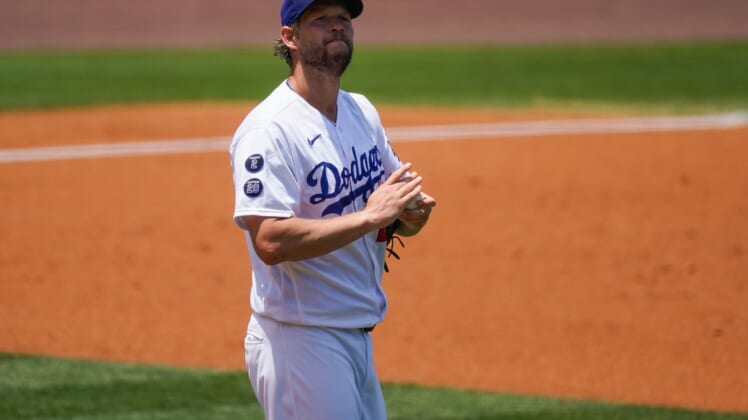 Kevin Gausman went six shutout innings to continue his run of dominating pitching and the San Francisco Giants held on for a 5-4 victory over the host Los Angeles Dodgers on Sunday to win their third consecutive game against their National League West rival.

The teams finished a run where they played each other seven times in 10 days, with the Dodgers winning the first four.

Gausman (6-0) gave up just two hits with seven strikeouts before he came away with a left leg injury while fielding a slow roller by the Dodgers’ Matt Beaty to end the sixth inning. He did not return for the seventh after throwing 72 pitches and was diagnosed with left hip tightness.

It was Gausman’s third consecutive scoreless outing and he has not given up more than one run in an outing in eight consecutive starts going back to April 19.

Max Muncy and Albert Pujols hit home runs for the Dodgers, who were held scoreless through seven innings. It was Muncy’s fifth homer in six games against the Giants this season.

Kershaw (7-4) gave up five earned runs to match a season high, while allowing seven hits in six innings of work. He walked a season-high three batters while recording six strikeouts.

The Giants took a 1-0 lead four batters into the game on a ground out by Evan Longoria. One batter later, Dubon’s hit a two-run home run to left.

The Giants made it 4-0 in the third inning on Slater’s home run, his seventh, before Gausman helped his own cause with a fourth-inning single to score Dubon.

The Giants are 10-4 going back to May 16, with all four defeats to the Dodgers.

Playing without leadoff man Mookie Betts because of an allergic reaction, the Dodgers avoided being shut out for the first time this season on Muncy’s homer in the eighth. The two-run shot was his 13th of the season and the 100th of his career.

Pujols’ two-run shot in the ninth was his third since joining the Dodgers and the 670th of his career.

Giants left-hander Jake McGee earned his 12th save despite giving up two runs in the ninth.