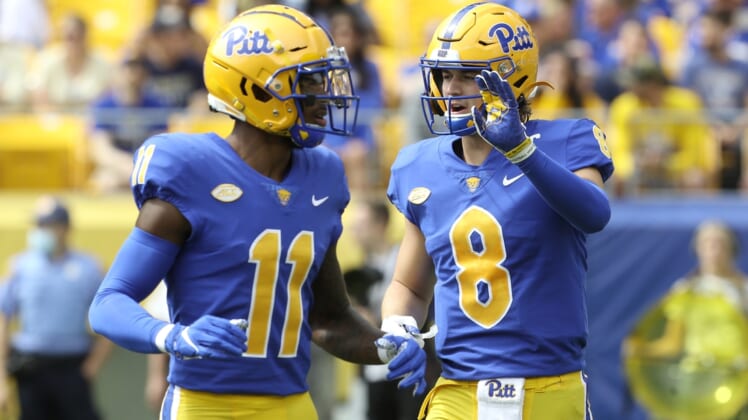 The Pittsburgh Panthers continued their torrid offensive pace with a 52-21 romp against host Georgia Tech in an Atlantic Coast Conference contest Saturday in Atlanta.

Pitt (4-1, 1-0 ACC) extended a school record by scoring 40-plus points for a fifth straight game to start the season. Kenny Pickett finished 23-of-36 passing for 389 yards with four touchdown passes to four different targets. Jordan Addison (six catches for 117 yards and a TD) and Taysir Mack (five receptions for 121 yards and a TD) both topped the century mark.

Israel Abanikanda added 60 yards rushing and two touchdowns for the Panthers, who entered No. 2 in the nation in scoring offense (52.5 points per game) and eclipsed the 50-point mark for the third time in five games.

Georgia Tech (2-3, 1-2) entered with the No. 25 passing defense in the country and had allowed just 36 points combined in its first two league games. But Pickett threw for 300 yards and the Panthers had 42 points by halftime.

Jeff Simms completed 24 of 33 passes for 371 yards with two touchdowns and two interceptions for the Yellow Jackets. Jahmyr Gibbs had six catches for 125 yards.

But Georgia Tech had three empty red-zone trips thanks to a missed field goal and failed fourth-down conversions in the third and fourth quarters.

Pitt put the game away in the first half with a barrage of big plays. The Panthers intercepted each of Sims’ first two passes, the second of which resulted in John Petrishen’s 33-yard pick-six and a 14-0 lead with 9:16 left in the first quarter.

The Yellow Jackets got on the board with Sims’ 44-yard scoring strike to Nate McCollum but simply couldn’t keep pace.

Pickett threw an 11-yard touchdown to Addison for a 21-7 lead, and his 55-yard heave to Mack down the left side made it 28-7 early in the second quarter.

Georgia Tech pulled to within 28-14 on Dontae Smith’s 3-yard TD run, but Abanikanda’s second touchdown run — from 6 yards out — pushed it out to 35-7 with 6:14 left in the half. Pickett’s 16-yard touchdown to Lucas Krull gave the Panthers the 42-14 lead at the break.