WATCH: Kennedy Brooks rushes No. 6 Oklahoma past No. 21 Texas 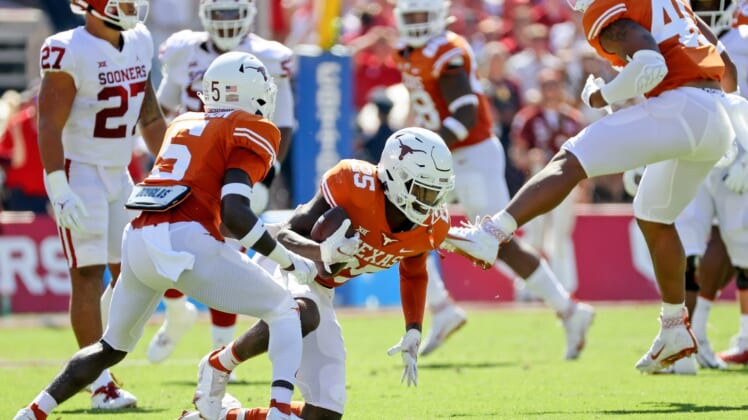 Kennedy Brooks ran for 217 yards and two touchdowns, including a 33-yarder in the waning seconds, to lift No. 6 Oklahoma to a 55-48 win over No. 21 Texas on Saturday in Dallas.

Texas held a big lead early, but the Sooners rallied to take a fourth-quarter advantage after Texas’ Casey Thompson hit Xavier Worthy for a 31-yard touchdown with 1:23 left.

Brooks didn’t leave it up to kicker Gabe Brkic, however. He took a direct snap on first down and powered his way into the end zone to cap his monster day.

Williams replaced starter Spencer Rattler in the second quarter after the latter threw an interception and lost a fumble. Rattler also was benched in the first half of last season’s Red River Showdown but returned to lead the Sooners to victory.

There was no return this time, as Williams threw for a pair of touchdowns and ran for 88 yards and a score.

Marvin Mims had five catches for 136 yards and two touchdowns for the Sooners.

The comeback from an 18-point deficit late in the third quarter spoiled impressive days from Thompson (388 yards passing, five touchdowns), running back Bijan Robinson (137 yards and a touchdown) and Worthy (261 yards and two touchdowns on nine catches).

The Sooners trailed 41-23 late in the third quarter before Williams sparked the Sooners, connecting with Mims for a pair of touchdowns — the second with 7:25 left to tie the game.

It was a 52-yard reception by Mims to tie the game for the first time since the opening 14 seconds of the game.

The momentum kept rolling the Sooners’ way from there, as Worthy took the ensuing kickoff out of the end zone and ultimately fumbled.

One play later, Brooks took the direct snap 18 yards for a touchdown.