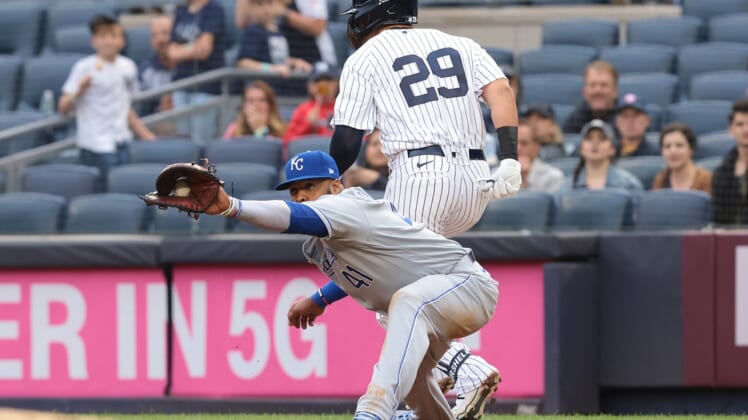 The Kansas City Royals scored four runs in the eighth inning and Greg Holland survived a jam in the ninth as the Royals hung on for a 6-5 victory over the New York Yankees on Tuesday night at Yankee Stadium.

With Kansas City behind 3-2, Whit Merrifield opened the eighth with a single and took third on a double by Santana. Both players scored on ground balls hit to second baseman Tyler Wade.

With one out, Ryan O’Hearn hit a grounder up the middle. Wade ranged to his left, but his throw to first baseman DJ LeMahieu bounced, allowing Merrifield to score.

Jarrod Dyson then hit a grounder to Wade, who charged in slightly. Wade attempted to cut off the lead run by throwing home, but Carlos Santana made a headfirst slide and his left hand touched the plate in time.

Kansas City’s comeback occurred after the Yankees took a 3-2 lead when Wade scored on a wild pitch by Jake Brentz (2-0). Kyle Zimmer allowed a two-run homer to LeMahieu, and Scott Barlow stranded Aaron Judge at second in the eighth.

Holland struck out Gleyber Torres and Clint Frazier and, after an intentional walk to pinch hitter Gary Sanchez, he converted his fifth save in eight chances by getting Brett Gardner on a pop-up.

The loss also spoiled a successful return from an oblique injury by Luke Voit. In his first game since May 25, Voit homered on the first pitch he saw off Brady Singer and then hit a triple to left field that set up the tiebreaking run in the seventh; two fans leaned over and attempted to catch the ball while Dyson tried to make a leaping catch.

Kyle Higashioka also homered for the Yankees, who were 0-for-10 with runners in scoring position and stranded 13.

Merrifield hit an RBI grounder and O’Hearn homered off Cole.